The Pyramid is located in the Giza Necropolis very near Cairo, the capital of Egypt. The total mass of the great pyramid is estimated around 5.9 million tons and its volume is approximately 2.6 million cubic meters. The great pyramid was surfaced by white casing stones and blocks of highly polished white limestone; therefore the original monument shine brightly with the sun as a jewel.

It is a great testimony of perfection in design and construction that reached ancient Egyptian. Many people consider still Giza as a spiritual and energetic place; therefore several privates groups visit Giza all the time attracted by the mystical aspect of the Great Pyramid.

Historians believe that the great pyramid was constructed in the fourth Egyptian dynasty by order of Pharaoh Cheops (2560 BC approximately) and its construction lasted around 20 years. It was the tallest monument of the world during 3800 years with 146 meters height.

The great pyramid was constructed using an impressive number of workers. Herodotus, the Greek historian who made the first list of wonders, estimated that around 100 00 workers were used to built this colossal monument. Nevertheless, modern calculations estimate that at least 300 000 men would have been required for this monumental work.

Previously, it was believed that workers were slaves, but now there are modern theories that say they were skilled workers who camped near Giza for a salary; proof of this fact are workers’ cemeteries found by archaeologists in the vicinity of Giza . It is believed also that around 2 millions blocks (each block weights between 2 and 15 tons) of limestone, basalt and granite were used in the pyramid 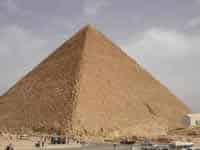 It is the only Egyptian pyramid that has both descending and ascending passages. The most popular theory about the goal of the pyramids says, they were used as tombs for pharaohs.

But, we know that airshafts were built into the King’s and Queen’s chambers; nevertheless we don’t know the purpose of airshafts; since pharaoh’s mummies don’t need air. Besides, no mummy or remains of any kind have been found inside the great pyramid.

These are some of the reasons why many Egyptologists and other academicians believe that pyramids were also ceremonial and religious centres, but the construction, date and possible symbolism of these amazing monuments are not still completely understood. There are several theories about the construction of the pyramids. The most accepted of them say that the pyramid was built moving huge stones from a quarry and dragging and lifting them into place.

Another important detail about the pyramids is their orientation, they are oriented 4’ west of north; some experts believe that this peculiar orientation is due to the position of the stars b-Ursae Minoris and z-Ursae Majoris about 3,000 years ago, thanks to this feature; some scientists date the start of the pyramid’s construction around 2467 BC.

There are three main chambers inside the pyramid, which are arranged centrally, through the vertical axis of the pyramid; being the largest the lowest chamber also known as “unfinished chamber”, which was cut into the bedrock upon which the pyramid was constructed.

The middle chamber is known as the “Queen’s Chamber” and it is the smallest of the three with around 25 square meters of area and 4.5 meters in height. A peculiar detail about this chamber is that was explored using a robot created by the German engineer “Rudolf Gantenbrink”. The Egyptologist “Mark Lehner” believes that this chamber was designed as a “serdab” a structure used in other pyramids in Egypt.

The third chamber is the main, the King’s Chamber. It is located at end of the lengthy series of entrance ways into the pyramid structure. Its original measurements were 10x20x11.2 cubits (5.25×10.5×6 meters).

These dimensions are consistent with the geometric methods that used the ancient Egyptians to determine the Golden Ratio phi. Inside the great pyramid, there had a great number of sarcophagus and a large gallery, which is 49x3x11 meters. This chamber contains also 2 “air shafts”, which ascend out of the pyramid, directly to the “Thuban” star and the “Alnitak” star in the “Orion” constellation. It believes that, these airshafts were used with ceremonial purposes; since they allowed to the pharaoh’s spirit to reach the stars.

The King’s sarcophagus is located in the King’s chamber and it was hollowed out of a single piece of red Aswan granite. A peculiar detail about this sarcophagus is that it is too short to accommodate a medium height person without the bending of the knees, but this burial technique was not used in the ancient Egypt.

Therefore, several scientists believe that the sarcophagus was not designed to host a human body.