Livingstone a border town is the current capital of the Southern Province of Zambia. The historic colonial city is a tourism centre for the Victoria Falls or Mosi-oa-Tunya, located 10 km south on the Zambezi River.

About Pre-colonial history: Before Livingstone was founded, Mukuni was the largest village in the area. The chief Mukuni came from the Congo in the 18th century to conquer Baleya inhabitants. Other group of Baleya lived near the river west of town, Tonga people was the most numerous in the area, they are culturally and linguistically similar to Baleya and grouped with them as the “Tokaleya”. 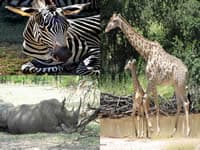 The Tokaleya paid tribute to the Lozi of Barotseland but in 1838 the Kololo migrated north, conquered the Lozi and placed chiefs over the Tokaleya.

In 1855 David Livingstone a Scotish missionary was the first European to explore the Zambezi and to see Victoria Falls when he was taken there by the Subiya/Kololo Chief Sekeletu. The Lozi threw off their Kololo masters and re-established their dominance in 1864.

In the 1890s an imperial rule north of the Zambezi by Cecil Rhodes’ British South Africa Compan, launched a wave of mineral prospecting and explotation of other natural resources such as timber, ivory and animal skins in the territory called North-Western Rhodesia.

The main crossing point of the Zambezi was above the falls at the Old Drift, around 1897 it became the first municipality in the country and sometimes is referred to as “Old Livingstone”. After 1900 the Europeans moved to higher ground known as Constitution Hill due to the proximity to mosquito breeding areas which caused deaths from malaria, and as that area grew into a town it was named Livingstone in honour of the explorer.

In 1904 the railway reached the Falls on the southern side and construction of the Victoria Falls Bridge started. With the new Bridge open in September 1905, Livingstone boomed and the capital was moved of the territory in 1907 and in 1911 it was merged with North-Eastern Rhodesia as Northern Rhodesia.

Livingstone prospered due to its position as a gateway to trade between north and south sides of the Zambezi. A number of colonial buildings were erected and still stand there. In 1935, the capital was moved to Lusaka to be closer to the economic heartland of the Copperbelt, industries based on timber, hides, tobacco, cotton and other agricultural products. A hydroelectric plant was built taking water from the Eastern Cataract of the Falls.

In 1981 in the movie “the Grass is Singing”, Livingstone was used as the location for a Southern Rhodesian around 1950, because some of the streets could pass without modification.

Livingstone has experienced resurgence in Tourism in the last ten years. The other hope on Livingstone’s horizon is development stimulated by the Walvis Bay Corridor with the opening of the Katima Mulilo Bridge and completion of the Transcaprivi Highway 200 km east, which funnels more trade through the town.

Livingstone is the only non-African name for a city town in Zambia not changed since independence, due to the influence of first president Kenneth Kaunda, whose father was educated by Scottish missionaries who followed in David Livingstone’s footsteps. Maramba has been proposed as a new alternative name for the city as a whole.