The Belize Barrier Reef is the largest barrier reef of the western hemisphere and the second of the world. It is composed by beautiful corals formations, myriad fish and invertebrates. Most species of reef-building corals live in the clear waters of the Belize’s sea. The Barrier Reef is composed by an amazing set of lagoon patch reefs, offshore atolls and fringing reefs.

One of the landmarks of the Belize Reef Barrier is the place known as the Lighthouse Reef, where a famous and large crater named Blue Hole (305 meters diameter and 122 meters deep) is filled by crystal-clear waters. Another important point of the reserve is Glover’s Reef, which is located at south; here it is the Emerald Forest a nice place that owes its name to the elk horn coral trees of big diameter and canopies of 3 meters height that grow here.

This wonderful underwater paradise is the home of porpoises, turtles, sharks, manatees, sharks, butterfly fish and many other marine organisms.

The Belize Barrier hosts also the largest population of West Indian manatee of the planet, endangered specie like the American crocodile, other specie that also lives here. Besides, the delicate ecosystem of this reef is composed also by cays, grass flats and mangrove swamps.

It is one of the most diverse ecosystems of the world housing over 70 hard coral species, 36 soft coral species, 500 species of fish and 350 mollusks, plus a great variety of crustaceans, sponges and marine worms. Nevertheless, most scientists believe that only 10% of the species that live in this ecosystem have been discovered.

In addition to the underwater life that sustains this ecosystem. The Belize Barrier reef is also the home of large colonies of sea bird such as red-footed, brown booby Sula, brown pelican, and frigate birds amongst other. This fascinating site is a paradise for the nature lovers, especially for the divers, who can find in the Belize Barrier Reef a new and wonderful universe that is beyond what anyone can imagine.

There evidence of human fishing in the Belize Barrier Reef since 2500 years ago; The Mayan used this reef for fishing between 300 BC and 900 Ad. Since that age, the Barrier Reef had an important role in the economy of the region, role that still meets to this day.

The zone of Bacalar Chico had a great importance to the Maya people as a ceremonial center. There are also vestiges of the Maya civilization in South Water Caye, Sapodilla Cayes and Glovers Reef areas. During the early Spanish colonial time the zone was abandoned by men, only some Spanish explorers used the region to repair boats or collect water. In the XVII century the region was used as refuge to pirates. 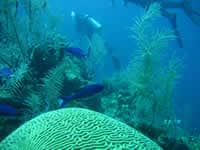 Charles Darwin the famous creator of the Evolution theory was one of the first scientists that studied the Belize Barrier Reef. In 1842, he referred to this marvelous ecosystem in his work about the origin and evolution of coral reefs.

Since then, the Belize Barrier Reef became the most famous coral reef of the Western hemisphere. In the XIX century began the waves of human immigration to the Barrier Reef area, mainly from Mexico, which continues until today because of the beauty and rich of the reef and the economic opportunities that represent.

In the lasts year the Belize Barrier Reef attracts around 150 000 tourists per year generating around 80 million dollars. The Reef is the main attraction of the country and one of the greatest sources of incomes.

Therefore, there is a big tourist infrastructure installed along the Barrier Reef. This place has been also subject of scientific research; mainly since the 1960s, several research organizations like the Smithsonian Institute or the New York Natural History Society have established research centers in the zone.

Unfortunately today, the Belize Barrier Reef like many other important underwater paradises of the planet, is overused by man seriously endangering its existence.

Therefore, the most part of the Reef Barrier is protected by the Belize Barrier Reef Reserve System, which is composed by 7 marine reserves, 450 cays and 3 atolls, which in total occupied an area of 960 square kilometers (370 square miles). The Reserve System was declared in 1996 World Heritage by UNESCO.

Nevertheless, despite all conservation efforts, almost 40% of the Reserve has been damaged since 1998; because of the oceanic contamination, the excessive tourism, agrochemical run-off, the uncontrolled fishing and the global warming. It is our task halt the destruction of this wonderful natural treasure and to preserve it for future generations.