Brasília is located in the central-west region (in an area ceded by the state of Goiás) of the country, along a plateau known as Planalto It is bordered by the Rivers Preto to the east and Descoberto to the west, bringing together in an area of 5,822 km2.

Brasilia is the fourth largest city in Brazil, after passing up Belo Horizonte and Fortaleza. However, as a metropolitan area, it ranks much lower at ninth. The city is commonly referred to as the Capital Federal of Brazil and one of the few modernist urban projects, or simply BSB. Brasilia is listed as a World Heritage Site by UNESCO.

Juscelino Kubitschek, who became President of Brazil in 1956, invited the best Brazilian architects to present projects for the new capital. So this same year, the city was planned and developed with Lúcio Costa as the principal urban planner and Oscar Niemeyer as the principal architect.

They combined straight, simplicity, functionality and rounded shapes to create innovative architectural masterpieces. Brasilia was inaugurated on April 22nd 1960, in the central area of the country. 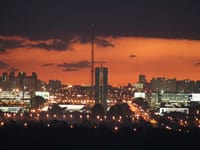 As the national capital and a cosmopolitan city, Brasília is the seat of all three branches of the Brazilian government. Brasília's economy is dominated by: services, industries and accommodation.

The city is hosts the headquarters of many Brazilian companies such as the Banco do Brasil, Caixa Econômica Federal, the Brazilian Central Bank, the Banco Rural and the Banco de Brasília, among others.

The city is an important tourism destination, it receives visitors from the whole of Brazil and the world; it offers a good range of restaurants with great diversity of food, hotels, complete infrastructure ready to host any kind of event, and its friendly people known as brasilienses or candangos.

Traditional parties in June like the large festivals celebrating the Catholic saints, such as Saint Anthony and Saint Peter, which are called "festas juninas", or June festival. Throughout the year there are local, national and international events spread through the city. Christmas and New Years Eve usually hosts major events.

Its main attractions are Esplanada dos Ministérios and the Praça dos Três Poderes (Three Powers Square), location of National Congress, the Planalto Palace (head quarters of executive administration) and the Supreme Federal Court (judicial authority), the Alvorada Palace, the Metropolitan Cathedral and the Itamaraty Palace, amongst other buildings, have become tourist attractions.

The city has a tropical climate, with seasons being defined according to the degree of humidity of the air: one season is dry, while the other one is comparatively humid. The average temperature is 20.5°C.