The National Park of the Chapada dos Veadeiros is located around 200 kilometers north of Brasília, in the state of Goiás, on the border of Alto Paraíso Township and Sao Jorge Village. The park occupied an area of 231.000 square mi (65514.73 hectares), but only a small portion of the park, which covers about 23.000 square mi, is open to tourists.

This area is part of the great watershed between the rivers Amazon, Paraná and São Francisco. The national park is a three hour transfer from Brasilia. From Alto Paraiso to the small village of Sao Jorge (where the entry to the park is located), there a road of 37 kilometers long.

Chapada is considered a paradise. The vegetation is varied: ciliar woods, buritis, dense fields, and typical dense woods. The trees are low and curved, and the vegetation is usually ground-high.

It is similar to the Savanna vegetation in Africa. There are also gallery forests with species like the purple trumpet-bush, copal trees, pepper trees, prickly ash trees, queen palm trees, murity palm trees, and babaçu palm trees, as well as more than 25 types of orchids.

Chapada is also well known for the concentration of quartz crystal which emerges from the ground between the beautiful flora in the area. According to NASA, the Chapada is Earth's brightest point as seen from space. For that the quartz crystal reflects the light as if it was a mirror.

One of the most incredible places in Chapada is outside the park’s limits. It is the Moon Valley, a place full of whitish rocks and natural pools formed between holes and mini caves.

The climate is comfortable year-round. Chapada dos Veadeiros is interesting to visit both in the dry season and the rainy one. The flora is more exuberant in the dry season (May - October). Also the amazing energy present in the region, it attracts people interested in mysticism and eco-tourism.

The Park is a great land for the active traveler, bird watcher and botanist. There is a camping area inside the park and some lodges where to stay in the outskirts. Also the park has a Visitor’s Center, as well as lodging for researchers. Visitation hours are from Tuesday thru Sunday, from 8a.m. to 3p.m., and are accompanied by guides that live in Alto Paraíso de Goiás or in São Jorge, hired upon arrival.

The remarkable terrain is one of the oldest surface formations on the planet, and therefore has been exposed to climate changes and constant erosion for about 1.8 billion years. 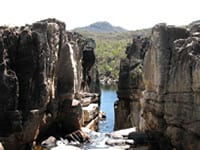 The National Park was created on January 11, 1961 by President Juscelino Kubitscheck. And it is recognized as a World Natural Heritage site by UNESCO in 2001, the region is a sanctuary for a precious natural environment (distinct bio-diversity) that is considered to be the richest of all the world's savannas, with an estimated 10,000 species of plants.

Here, nature remains untouched by civilization, thanks to IBAMA (Brazilian Institute of Environment and Renewable Natural Resources), environmental institutions, the local community, local companies, and the local public administration, which working actively to preserve the environment of the Chapada dos Veadeiros.

Visitors can entry into the Park only if accompanied by a local guide, and often a permit from IBAMA is sometimes required for entry to the park.