The name Florianopolis was meant to be a tribute to Marshall Floriano Peixoto, second President of Republic of Brazil (1891 - 1894); until 1894, the city was called Nossa Senhora do Desterro (Our Lady of Banishment). 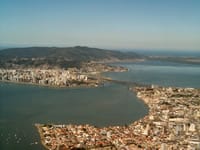 The economy of Florianopolis is based on tourism and services. The city has 42 immaculately clean beaches and is a center of surfing activity.

Veja magazine, a Brazilian publication, named Florianopolis "the best place to live in Brazil". As a result of this, Florianopolis is growing as a second home destination for many Paulistas, Argentines, U.S. people and Europeans.

Many small commercial fishermen populate the island. Although originally settled by the Portuguese, the city has a strong German and Italian influence, like the rest of the state. The fishing boats, the lace makers, the folklore, the cuisine and the colonial architecture distinguish the tourism and attract resources that compensate for the lack of large industry.

Many tourists come to this magnificent city of Brazil because they can find a lot of things to see in Florianopolis. Its tourist attractions have captivated the minds of tourists from immemorial times.

The best part of this island is its beaches. The island of Florianopolis is world famous for its beaches. Some of the beaches that you should not miss while you are in this region are the Joaquina beach, Galheta Beach, Barra da Lagoa and the Praia de Mocambique beach. These beaches are ideal for surfing purposes.

There are many other options for sightseeing in Florianopolis. Fort Santana, one of the finest monuments of Florianopolis is located at the foot of the Hercilio Luz Bridge. Fort Santana houses the Museum of Weapons of the Military Police or the "Major Antonio de Lara Ribas". 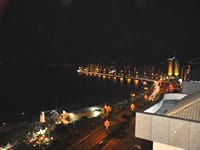 The Jesuit Monastery in Florianopolis is also a must visit. This monastery is located on top of the Morro das Pedras or the "Hill of Stones".

From here you can have great views of the Lagoa do Peri nature reserve. Meireles Birthplace also holds an important position in the category of Florianopolis tourist attractions.

The Museum of the Sambaqui People, located inside the Colegio Catarinense houses skeletons, urns and utensils of the indigenous inhabitants.

Florianopolis has the ideal climate, and it has fewer extremes as to highest and lowest temperatures. In summer, (December, January and February), it can get up to 32 ºC easily, while in winter, during June, July and August the temperature does not usually fall below 12ºC.

The best months during which to travel to Florianopolis tends to be April and the beginning of May, this is when the weather is most pleasant.