Foz do Iguaçu is the 4th largest city of Paraná state in Brazil and it is the 11th largest of the Brazil's Southern region, with a population over 309,000 habitants. It is located approximately 650 km west of Curitiba, in the southwester corner of Paraná State, near the borders of Paraguay and Argentina. Foz do Iguassu lies near of confluence of Paraná and Iguassu River. It is connected to eastern Brazil by a paved highway and to the Paraguayan city of Ciudad del Este via the Ponte da Amizade (Friendship Bridge).

Foz do Iguassu has been attracting visitors since the first European explorer stumbled across the area in the 1540s. The city is strategically positioned, seeing its position in Mercosul, and it is expected that its importance will increase following the formation of the SACN (South Community of Nations).

Foz do Iguaçu has few industries apart from electrical energy generation; mostly, basic textiles. The Itaipu Dam produces about 20% of Brazil's electricity needs, and employs (directly and indirectly) about 5000 Iguaçuenses (the inhabitants of the city). 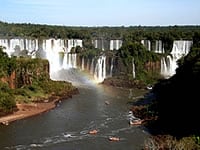 The town of Foz do Iguaçu, situated at the point where Brazil, Paraguay and Argentina meet, is one of the most important tourist centres in the whole of Brazil.

The shield of the coat of arms is blue, recalling the continuously clear skies, is the heraldic colour of beauty, pleasure, and recreation, attributes belonging to this city, given is geographic situation and its incomparable natural beauties, sought by tourists from around the world who are attracted by the exuberant vista of Iguaçú Falls.

The spectacular Iguassú Falls (with a flow capacity equal to three Niagara Falls) is located on the Iguassú about 24 km upriver from its junction with the Paraná. Parts of the falls are in the Brazilian side, others (the "Garganta do Diabo", the tallest of the falls, 97 m. high) are in the Argentinian side. Parque Nacional do Iguaçu (Iguazu National Park), in both Brazil and Argentina.

In the 1930s more than 1 million acres on the Brazilian side was made into a national park, and in 1985 the falls were designated an UNESCO World Heritage Site. At the southern end of downtown, Avenida das Cataratas tracks southeast towards Iguassu National Park and the falls. There are quite a few good hotels, some other attractions, and restaurants along this road.

The city is very heterogeneous, with many immigrant communities, such as: Arabs, Chinese, Germans, Italians, Paraguayans, Argentines, Palestinians, French, Portuguese, etc. The city has the second largest Chinese community in Brazil (approx. 55,000), and the third largest Islamic community (approx. 80,000, after São Paulo and Rio de Janeiro).

The city is predominantly Roman Catholic, Protestant and Spirits, but a relatively large minority of Muslims and Buddhists are represented in the city as well. The city itself has a large mosque and a Buddhist temple (the largest in Brazil).

The climate of Foz do Iguaçu is sub-tropical, with two distinctive seasons; one humid and hot in the summer and another, dry and cool, in the winter. The city's annual average temperature is 23.8°C, but can be as high as 47°C in the summer or as low as -5°C in the winter. The climate of the city is generally hot or warm throughout the year. Generally, the city is sunny during the year, but rain is fairly common during the spring and in the summer with frequently of thunderstorms.