The project ranges from Foz do Iguaçu, in Brazil, and Ciudad Del Este in Paraguay, in the south to Guaíra and Salto Del Guaíra in the north. The name Itaipu was taken from an isle that existed near the construction site. In the Guarani language, “Itaipu” means "the sound of a stone".

The Itaipu Reservoir is 170 km long with an area of 1.35 km2 and has a volume at maximum normal level of 29 billion tons of water. It consists of a series of various types of dams the height of the dam reaches 196 m, its length 7.76 km. The Powerhouse is located at the toe of the main Dam, most of it on the river bed and the rest on the Diversion Channel.

The main structure, a hollow, concrete gravity dam, has a powerhouse capable of generating 14,000 megawatts (MW) of electricity. The main powerhouse has 18 Francis turbines each with a rated power of 715 MW. The Spillway is located on the right bank, and it has 14 segmented sluice gates with a total discharge rate of 62,200 cubic meters per second.

The volumes of construction in Itaipu are also impressive. The volume of iron and steel utilized in the Dam structure would be enough to build 380 Eiffel Towers, and the volume of concrete used in Itaipu represents 15 times the volume utilized to build the Channel Tunnel between France and England.

The power plant is a major tourist attraction in the Foz do Iguacu area. More than nine million visitors from 162 countries have visited the structure since it was completed in 1991.

On June 22, 1966, the Ministers of Foreign Affairs of Brazil, Juracy Magalhaes, and of Paraguay, Sapena Pastor, signed the "Act of Iguaçu ". A study was carried out under this Act that assessed the potential hydraulic resources of the Paraná River, which is jointly occupied by the two countries. In 1967, the Brazilian-Paraguayan Joint Technical Commission was established to carry out the study and the development of the Paraná River.

On April, 26, 1973, the two governments of the states signed a treaty "for the development of the hydroelectric resources of the Paraná River" and founded ITAIPU Binacional (cooperation with the legal, administrative and financial capacities and technical responsibility to plan set up and operate the plant) in May, 17, 1974. 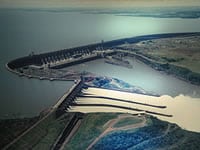 It took almost three years for workers to carve a 1.3 mile long, 300 foot deep, 490 foot wide diversion channel for the river. Fifty million tons of earth and rock were removed in the process. Engineers chose a hollow gravity dam because it required 35 percent less concrete than a solid gravity dam. The hollow dam is still heavy and sturdy enough to resist the thrust of water entirely by its own weight.

Sometimes the dam can get blocked with mud and silt. It is expensive to clean the dam out. The mud and silt can cause diseases in the water in the reservoir. Unless the water in the reservoir is cleaned, people can get these diseases. The land behind the dam and reservoir had to be flooded. Much of this land was rainforest and the trees had to be cut down. Many parrots died because their homes in the trees were destroyed.

In 1982 the land behind the dam was flooded and within 14 days the reservoir was created. Unit 1 started to operate in December 1983. Electrical grid connection to Paraguay was established in March 1984, Brazil was connected 5 months later. In March 1991 the last Unit (No.18) was put into operation.

The magnitude of the project also can be demonstrated by the fact that in 1995 Itaipu alone provided 25% of the energy supply in Brazil and 78% in Paraguay.