Manaus is a city in Brazil, the capital of Amazonas state. It is located in northern of Brazil on the north bank of the Rio Negro, 18 km above the Meeting of the Rivers where the Negro merges with the Rio Solimões. Manaus is 1,450 km inland from the Atlantic.

It is the most populous city of Amazonas, according to the Brazilian Institute of Geography and Statistics and also is a popular ecotourism destination. 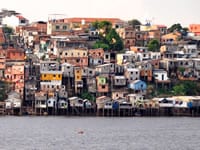 Manaus was elevated to a town in 1832 with the name of "Manaus", which means "mother of the gods" in tribute to the indigenous nation of Manaós.

It was then legally transformed into a city on October 24 of 1848 with the name of “Cidade Da Barra do Rio Negro”, Portuguese for "The City of the Margins of River Negro". Only on September 4 of 1856 did it revert to its current name.

The city is the second largest metropolitan area in northern Brazil and the twelfth in all Brazil. Currently, the city is one of 12 most influential cities of Brazil. Its total area is 14.337 square kilometers. The city is plan, many Igarapés (flooding areas) are part of the scenery, and an average twenty minutes drive leads you into the forest from downtown.

The city itself has some genuinely rewarding sights, including a leafy zoo with as many animals out of the cages as in them, and a beach-and-museum combo that gets you out of the city center.

As the largest city and a major port on the river, Manaus is commercial. Local industries include brewing, shipbuilding, soap manufacturing, the production of chemicals, the manufacture of electronics equipment, and petroleum refining of oil brought in by barge (down the Amazon from Peru).

Principal exports include rubber, Brazil nuts, rosewood oil, jute, and a host of minor forest products; cordage and coffee sacks are made from jute. 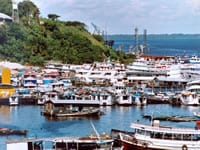 Of course Manaus is an important tourist destiny to Brazilians and all people around the world. These tourists visit the city; use it as a base to other journeys, studies, and business, anyway, anything concerning the convenience of a big city.

Also it is an important centre for ecological tourism. One of its most popular attractions is the Ponta Negra beach, 13 km from the centre of the city, where, when the river is low, the sands are exposed right down to the river bed, forming a beautiful contrast with the dark waters of the river itself.

There is also the forested area of the National Research Institute of Amazonia (INPA), a complex made up of the Botanical Gardens, rich in plant species from the Amazon region, and the Zoological Gardens, which contain various animal species of the region, including some facing extinction.

Manaus is the Amazon pattern of climate. It is hot and humid, and the seasons are limited only to two stations: winter (or rainy season) which begins at the end of December and ends by June, the summer (or dry spell), at the rest of the period. Temperature oscillates between 28 and 40ºC.

As the city is 40 meters above the sea level, it rains approximately 2.100 mm around the year, it contributes to the region's rivers and igarapés phenomenon called "cheia" and "vazante", when the river and some land areas flood and get dry respectively.