Matto Grosso is one of the states of Brazil, located in the western part of the country.

It is bordered to the north by Amazonas and Para, east by Goyaz, Minas Geraes, Sao Paulo and Parana, south by Paraguay and south west and west by Bolivia. It is the third largest state in area; it ranks next to Amazonas in size, its area, which is largely unsettled and unexplored, being 532,370 sq. m.

Mato Grosso is a state where nature is a prominent feature. In addition to containing the boundaries of the Amazon Forest to the south, its territory includes a major part of the swamps comprising the extraordinary Pantanal Matogrossense (Wetlands) as well as the stone walls of the mysterious Chapada dos Guimarães. 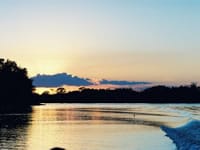 In the north is the Amazonian forest, with a biodiversity that covering half of the state.

The Xingu National Park and the river Araguaia are in Mato Grosso. Further south, the Pantanal, the world's largest plain covered with water, is the habitat for almost a thousand species of animals, with many aquatic birds.

Tourism is increasingly common in the Matto Grosso as visitors come to see the tremendously varied wildlife. Birding and fishing are particularly popular.

The state’s lowlands are hot and humid, and its highlands are hot and dry. The average temperature is 26 °C. Average annual rainfall is 1,400 mm. There is a distinct dry season from May to September.