Pernambuco is a state of Brazil, located in the Northeast region of the country. To the north are the states of Paraíba and Ceará, to the west is Piauí, to the south are Alagoas and Bahia, and to the east is the Atlantic Ocean.

The capital, Recife, also called Pernambuco, has one of most beautiful urban areas of the country, Boa Viagem. Together with its neighbouring city of Olinda, it is one of the most cosmopolitan cities in the northeastern part of Brazil. Recife is located partly on an island and partly on the mainland. Also it is called the Venice of Brazil for the numerous canals through the city. 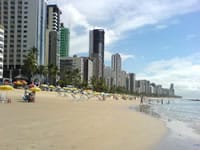 The Rio São Francisco is the main water source for this area. The coastal area is fertile, and was formerly covered by the Mata Atlantica. It is the Atlantic Rain Forest formerly covering the wet coastal hills behind the Atlantic beaches of Brazil.

Mata Atlantica is now designated a World Biosphere Reserve and contains a large number of highly endangered species. It is now place to extensive sugar cane plantations. It has a hot, humid climate, relieved to some extent by the south-east trade winds.

The middle zone, called the agreste region, has a drier climate and lighter vegetation, including the semi-deciduous Pernambuco interior forests, where many trees lose their leaves in the dry season. The inland region, called the sertão is high, stony, and dry, and frequently devastated by prolonged droughts.

The Port of Recife and Suape Port play an important role for the economy of Pernambuco. Pernambuco is the exports center for sugar, fruit and juice, coffee, cotton, fish and crustacean, electric products, chemicals, woven. 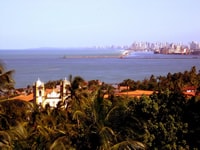 The state has the second biggest industrial output of the Northeast, just behind Bahia. Another segment that deserves to be highlighted is mineral extraction. Pernambuco State has the 5th highest sugarcane Brazilian production.

Being the transportation hub of the Northeast, Recife has been easy for visitors to get to, and in the last decades has developed its tourism industry.

The special carnaval in Recife is considered by many as the best carnaval in Brazil. The carnaval preparations start months ahead with dance rehearsals, bailes, for Pernambuco's favorite dance, the frevo, and culminate in the night and day celebrations during the week of carnaval.

The climate of Pernambuco is tropical. There are two clearly defined seasons, a rainy season from March to June, and a dry season for the remaining months and the temperatures never drop below the 23ºC.