Petropolis is a town in the state of Rio de Janeiro, about 65 km from Rio de Janeiro. It is about 800 meters above sea level, on the Serra dos Órgãos. It is also inside the region of Las Sierras.

It is possible to arrive there from Rio, by car, in 1 hour and 30 minutes approximately. 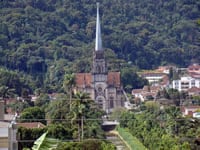 With a mild climate and mountains covered in the lush vegetation of the Atlantic Forest, Petropolis became the Brazilian Imperial Family´s favourite summer resort, back in the 19th century.

The city is also known as The Imperial City of Brazil and its name means "city of Pedro"; because Pedro I and Pedro II were the only two Emperors of Brazil.

Petropolis economy is based on tourism and services sectors. For its large trade in clothing, especially in the Teresa Street and Itaipava, that attracts buyers (wholesalers and retailers) across the country. Also it is home to the National Laboratory for Scientific Computing (LNCC), a research unit of the Ministry of Science and Technology of the Brazilian Federal Government.

Petropolis is a popular summer holiday spot. Besides the climate and surroundings, the main attraction is the former Summer Palace of the Brazilian Emperors, which is now a museum, specializing in Imperial history and memorabilia.