The Carnaval de Rio de Janeiro (Carnival of Rio Janeiro) is an annual celebration in Brazil. The main parade of Carnaval de Rio is at the Sambodrome, a massive concrete stadium, built along Avenida Marques de Sapucai front of a live audience of 70,000.

The Carnaval is a four-day celebration, happening from Saturday through Tuesday. It is usually in February, sometimes in March.

Carnaval focuses on the competition between the 12 samba schools, each with its own theme or argument representative. The lyrics, the music itself, the costumes of the figurants, the papier-mâché figures and paintings of the allegoric car, all must accord with the selected theme.

The themes may be very diverse: they can be a myth, a historical, present event, a political or artistic personality, etc. Every school presentation is a result of months of preparation.

Each samba school is trying to win favor with the spectators in a frenzy of singing and dancing. A panel of 40 judges at strategic points along the carnival route qualifies the contestants on everything from enthusiasm, fidelity to the theme, discipline and costume to rhythm and dance.

The classification defines not only celebrity, fame and joy for the samba school, but also public money for their activities.

Each samba school exhibition includes a fixed set of components like:

The Carnaval is an epic event televised around the world. Also actually is possible to take part in the parade and dance with the samba schools.

Carnival originated with an ancient Greek spring festival honoring the wine god Dionysus. Under the Roman Catholic Church, the event evolved into a massive sacred ritual with food, alcohol, and music followed by forty days of personal reflection, abstinence, and fasting call Quaresma. 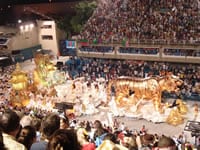 The avenue, which was inaugurated in December 1891, is generally regarded as the second most expensive real estate anywhere in Latin America, after México City´s Avenida Presidente Masaryk.

By 1900, the coffee barons had moved on from Higienópolis to flaunt their wealth through new mansions set in spacious gardens stretching along the three kilometers long of the Carnaval. Since the 1960s, Carnaval resembled a giant construction site, with banks and other companies, which competing to erect ever-taller buildings.

Which goes from the Ash Wednesday to the Easter Sunday; because Catholics are supposed to follow some penitence during the Lent, the feast was a kind of pre-tension-reliever.

The origin of Brazil's carnival goes back to a Portuguese pre-lent festivity called "entrudo", a chaotic event where participants threw mud, water, and food at each other in a street. Carnival street parades followed a decade later with horse drawn floats and military bands. The sound closely associated with the Brazilian carnival, the samba, wasn't part of carnival until 1917.

Much more than musical groups, they are in fact, neighborhood associations that provide a variety of community needs such as educational and health care resources. The street parades and neighborhood samba schools or Escolas de Samba began to compete with each other in the 1930's.

Since the Rio Sambadrome, designed by Oscar Niemeyer opened in 1984, much of the dancing and celebrations take place there in night long parties that begin at 8:00 PM and last until dawn.

Today, the Carnaval is famous for the rhythmic, sexy samba and rumba music and dance forms. The parade involves more than 50.000 figurants, and a selected number of top samba schools. Most of the schools, representing many districts and social clubs and interests, aren’t present in the main Samba School Parade.

There are two classes of samba schools: those which parade on the Avenida Rio Branco and those at the Sambadrome. The former are considered less prestigious, but are top quality nonetheless. They're also free. The best views are from the cadeiras (ground level terrace seats), the arquibancadas (terrace seats) and the camarotes (boxes).

Boxes are recommended if you pick one of the better viewing areas, which are 4, 7 and 11, but the terraces are more raucous. Tickets for the Sambadrome can usually be reserved through most good tour operators.

This is a big event, however, and it's often oversubscribed and expensive. The money needed to equip the Escola's dancers comes from ticket sales, television rights and the member's own pockets.