The statue of Christ the Redeemer is located at the top of Corcovado Mountain. The entire monument of statue of Christ the Redeemer is 38m high with the statue accounting for 30m and overlooking the city of Rio de Janeiro is one of the tallest statues in the world; the span from finger tip to fingertip is 28m and there is a small chapel housed in the base.

The reason why it was built was to show that Christ loves all. In Portuguese, this iconic monument is known as Cristo Redentor. Christ the Redeemer was designed by a French sculptor by the name of Paul Landowski and a local engineer named Heitor da Silva Costa was chosen to supervise the entire construction. The statue was built not out of steel but from reinforced concrete as that was considered a more suitable material for the cross shaped statue. The external caps of the idol were constructed in soapstone due to the resistance of this material to the extreme time and also due to its malleability.

The statue of Christ the Redeemer can be accessed by the 2.4 meter Corcovado Railway that has the capacity to hold 360 passengers every hour. The trip by rail is approximately 20 minutes and leaves the base each half hour. From the road or the train terminal Christ the Redeemer statue is reached by 222 steps. For those not wishing to make the arduous trek up the mountain, reaching the statue is possible by escalators and elevators.

Christ the Redeemer is one of the tourist attractions that every year attracts to more and more visitors. The best time to visit the Christ the Redeemer statue is late afternoon or evening when you can enjoy the splendour of the setting sun while taking in one of the most important landmarks in the world.

The history brings over of the construction of Christ's Redeemer statue begins in the century XVI, when the Portuguese gave the name of “Corcovado Mountain”, to one of its more impressive mountains an allusive name to its form hump.

In 1924, Don Pedro personally drove to the first official expedition to the Corcovado Mountain, this expedition end with the opening of an accessible raise to the above mentioned mountain. Then in 1859 the father Vincentian Pedro Maria Boss came to Rio de Janeiro and was struck by the mysterious beauty of the Corcovado Mountain and suggested the construction of a religious monument in honour of Princess Isabel, who in 1921 gave way for the idea of a great statue of Christ. 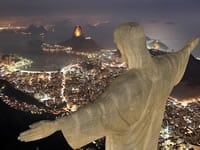 From 1859 to 1921, Don Pedro gave his consent for the building of the Corcovado Railroad line between Cosme Velho and Paineiras. After a hard competition, the project by the engineer Heitor da Silva Costa is chosen and in September, a national fundraising campaign for the works is organized.

Finally, in 1927, the construction of the statue begins after models of diverse sizes had been constructed. All calculations were done by Coast Hisses, helped by Pedro Viana and Heitor Levy, which during the years of construction, resided in a shed of wood at the foot of the monument.

All the necessary work material and workers who participated in the construction of the Christ statue were transported to Corcovado by the trains from the railroad that links the street Cosme Velha, which today functions as a tourist train to the top. The train was the first in Brazil appointed exclusively to transportation of tourists and also the first train to work by electricity.

The monument was inaugurated on October 12, 1931. The final design of the monument was of the artist Carlos Oswald and the person in charge of realizing the sculptress was the Frenchman Paul Landowskitura. The monument to Christ, the Redeemer on the Corcovado Mountain is one of the biggest déco sculptures in the world. Up to today, several reforms have been completed to assure the quality of the Christo Redeemer. Lighting has been added, and the latest renewal of September 2002 is the addition of a panoramic elevator and motorized staircase to ease the difficulty for elderly persons.