Jardim Botânico is located in the heart of the South Side, minutes away from Ipanema and Copacabana. The Botanical Garden extends over 350 acres and is home to more than 6,000 different species of both tropical and subtropical plants and trees.

The garden is known as one of the ten most important Botanical Gardens in the world. It is dotted with historical buildings, sculptures, fountains and monuments, with dated from the sixteenth to nineteenth centuries.

The most well-known symbol of the park is the royal palms, dating back to the period of Dom João VI. The Jardim Botatinco also includes many threatened species of plants including the “pau-brasil”, “acará amarelo” and “pau mulato”.

The gardens have several special areas featuring plants of specific Brazilian regions such as the area called "the Amazon region”, with dense vegetation.

The Japanese Garden created in 1935 from a donation of sixty-five species of plants typical of Japan, conducted by the Embassy of Japan. It is a typical Japanese garden of stone, bamboo, cherry, willow and bridal bouquets, and two lakes surrounded by lotus flowers.

Throughout the garden there are monuments of historical, artistic and archaeological interest, and a major research center which includes the central fountain, sculptures of Mestre Valentim, Eco and Narciso, a library specializing in botany, with over 32 thousand volumes. 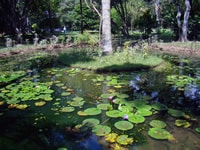 The greenhouses with bromeliads and orchids are very popular, with some 1,700 species of formations, the greenhouse plants, insectivorous plants that capture and digest insects, the collection of cactus, and medicine plants.

Another highlight is the Lago Frei Leandro, which houses beautiful species such as lotus, water Papirus feet, herons, butterflies, etc. There is also a gunpowder factory built by D. João VI, Pilões, the House of the Cedars, the house of Pilões, the Academy of Fine Arts, etc.

Finally, a beautiful avenue of imperial palms magnificent called Lagoa Rodrigo de Freitas, a gift shop and a small cafe conveniently located within the perimeter. The exuberance of nature ensures that the visitor is impressed by the color and variety of flora.

Jardim Botânico do Rio de Janeiro was founded on June 13, 1808 by Dom João VI, who then was prince regent of United Kingdom of Brazil and Portugal. It is one of the great tropical botanical gardens of the world.

The Botanical Garden was originally created to adapt to the Brazilian climate plants like nutmeg, pepper and cinnamon that were imported from the Western Indies. It was open for public visitation in 1822 during the reign of Dom Pedro I, Dom João VI's son. 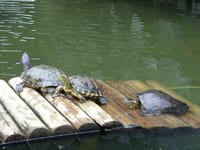 In 1937 it was listed as part of the Brazilian Historical Heritage, and in 1992 it was considered by UNESCO a biosphere reserve.

In 1995 was built the sensory garden with Braille plates, especially for visitors with visual impairments and a year later a new greenhouse bromeliads.

The garden is currently protected by the Patrimônio Histórico e Artístico Nacional or IPHAN, for its historical, cultural and scientific importance to Brazil. Famous visitors include Albert Einsten and England’s Queen Elizabeth.

The Gardens are open from 8 am to 5 pm, 7 days a week. Guided visits are available from 9 am to 4 pm and guides speak English, Spanish and Portuguese. At present the garden is maintained and preserved with the help of a group of public companies, private and protective associations.