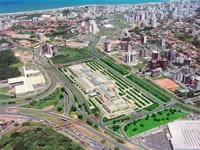 It was the first town to be founded in Brazil, on March 29th 1549; the city was for a long time known as Bahia, and appears under that name on many maps and books from before the mid 20th century.

It was originally the seat of government of the colony. But in 1763, it was succeeded by Rio de Janeiro.

For three centuries it was the principal port for the import of slaves from Africa. Afro-American peoples and mulattos now form the majority of the population, and African influence is evident in the life of the city in many different fields, in music, cuisine, in religious cults such as Candomblé and Umbanda.

The coastline of Salvador is equally varied, having majestic, sandy beaches, mangrove swamps, sea cliffs and few islands. Itaparica is the largest among them. The best of the many beaches are the Praias do Farol da Barra, do Rio Vermelho, de Amaralina, do Jardim de Alá, de Piatã, de Placaford, de Itapoã, do Farol de Itapoã, do Flamengo and de Stella Maris.

The port and city still play a critical role in the economy of northeastern Brazil, providing commercial services for a vast region and exporting cocoa, sisal, soybeans, and petrochemical products. Local industries include fishing, oil and gas extraction, cigar manufacture, a petrochemical, the complex at Camaçari (an assembling plant of the Ford Motor Company), an oil refinery, and tourism.

Salvador is the second most popular tourist destination in Brazil. Tourism and cultural activity are important generators of jobs. Chief among the points of interest are its famous Pelourinho district, its historic churches, and its beaches. Salvador's tourism infrastructure is considered one of the most modern in Brazil, especially in terms of accommodation. 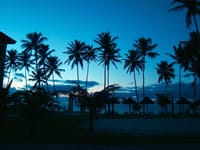 It was designated a World Heritage Site by UNESCO. It boasts one of the largest collections of colonial and Baroque architecture in Latin America.

Also, there are several museums and archaeological buildings in this city which should not be missed out during the holiday trip to Salvador.

After Unesco sponsored a restoration project, the area has become the focus of cultural life. During the day, the area is the domain of craftsmen and artists. At night it becomes a rhythmic variety.

Salvador has a typical tropical climate, with warm to hot temperatures and high relative humidity all through the year. However, these conditions are relieved by a near absence of extreme temperatures and trade winds blowing from the ocean.

For a true taste of Brazil’s fascinating Afro-American culture, Salvador is one of the best choices. It offers excellent accommodations, hotels, restaurants, abundance of amenities, attractions, etc., of the Brazilian culture.