Sao Paulo city is located in southern Brazil, a distance of only about 70 kilometers from the Atlantic Ocean. The name means Saint Paul; it is the capital of the State of Sao Paulo, the most populous Brazilian state. 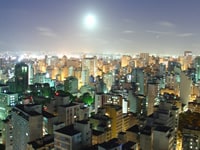 The city is the largest city in Brazil. Also it is the most important business center in Brazil, and the world's third most populous city.

It is an energetic metropolitan area ranked as the second most populous in America, just behind Mexico City. Besides Sao Paulo is the 19th richest city in the world and is expected to be the 13th richest in 2020.

It is compared with other metropolitan region of the world such as Tokyo, Seoul, Mexico City and New York City and it is a headquarters for most of Brazil's banks and leading corporations.

The city has many renowned landmarks, it is a concrete city with more than 30 parks totalizing 15 millions of square meter green area like the Parque do Ibirapuera.

Acclaimed as a city of business and tourism; it is a headquarters to some of the most important international events such as economic, cultural, scientific or sports. Sao Paulo is visited by a higher number of tourists, politicians and business people than any other city in Brazil. 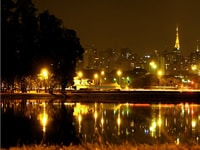 With more than 12,000 restaurants of more than 40 different world cuisines, more than 70 museums, over 200 cinemas, around 50 theaters, art galleries, cultural centers, and many lovely beaches.

Its entertainment and nightlife have for years attracted people from around the world, because the nonstop pace of Sao Paulo makes this a prime destination for nightlife in Brazil outside of Rio de Janeiro.

The subway system is clean, safest and efficient get around Sao Paulo, but covers only a few areas of the city, it is not as comprehensive as the trains in Europe or North America, but it serves most of the important areas.

Sao Paulo is also known for its unreliable weather, because it has a humid subtropical climate. Temperatures seldom reach 30°C during summer.