The CN Tower is the World's Tallest Building and Free-Standing Structure and has the world's highest public observatory, although it is not considered to be a traditional building. At a height of 553.33m, it is an important telecommunications hub. It is almost twice as tall as the Eiffel Tower and more than three times the height of the Washington Monument.

Located in Toronto, Ontario, Canada at the southern end of town to the north shore of Lake Ontario, the CN Tower is easily accessible from many major streets and highways. It was erected as a communications and tourist tower.

The CN Tower consists of a main hexagonal hollow pillar of concrete containing the elevators, stairwells and power and plumbing connections. To the main pillar are attached the broadcast antenna and the two main visitors area. The main pillar has three supporting legs giving it the appearance of a camera tripod.

Some floors of the Main Level are open to the public. At 342 m is the Glass Floor and Outdoor Observation Deck. The Glass Floor consists of thermal glass units that are 64mm thick. The floor has an area of 24sq metre and can withstand a pressure of 600psi. At 346m is the Horizons Cafe and Look Out level.

There is a rotating restaurant at 351m called the 360 Restaurant. It revolves completely in 360 degrees every 72 minutes. The rotation is slow enough that you can enjoy the fantastic views of Toronto without realizing your view is changing every moment. Below the Main Level is the tower's microwave receiver shaped like a big white donut.

The Sky Pod is presently the highest observation deck in the world. From here, you can see 100-120 km away, to the city of Rochester across Lake Ontario in the US, and see the mist rising from Niagara Falls.

The CN Tower has the tallest metal staircase in the world. At the 1776th step, the staircase reaches the Main Level. The staircase is intended only for emergency use, and is not open to the public outside three times a year during the charity stair-climbing events.

At the base of the Toronto CN tower is an attraction called the Tour of the Universe. For the price of entry you can walk through a simulated space port, see a laser show and experience what it’s like to fly through space.

Tour of the Universe is open daily from 10am until 10pm. The CN Tower is open 364 days a year (closed on Christmas Day). Hours of Operation are daily from 9am-10pm January-April; 8am-11pm May-December. Cost is $16 for adults.

The CN tower history dates back to February 6, 1973 when the tower construction began by Canadian National Railway. The CN originally refers to "Canadian National", it was built on former railway land which the railway company had planned for a development called Metro Centre.

The CN Tower was constructed when Toronto was experiencing an economic boom. Indeed the Canadian National Railway had planned it to demonstrate the strength of Canadian industries, and CN in particular.

The late 1960s and early 1970s was a particularly prosperous time for Toronto, which see a sprout of large skyscrapers. This causes some difficulties in broadcasting to the downtown area, due to reflections from these tall buildings. The solution is to raise the antenna above all these buildings. At that time, most data communications use point-to-point microwave links that require line of sight links. 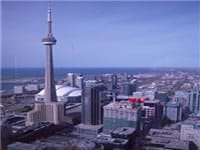 A Toronto firm prepared the initial design, enlisting the aid of engineering experts the world over. Their original plan showed three towers linked by structural bridges. Gradually the design evolved into a single 1,815.5-foot-tall tower comprised of three hollow "legs".

Giant backhoes excavated more than 62,000 tons of earth with a depth of 50 feet from along the shore of Lake Ontario in Toronto harbour. Next, pressed concrete and reinforced steel were arranged in a Y-shaped pattern 22 feet thick.

The foundation took four months to complete. The tower itself presented a challenge of height never before met by the technique of poured concrete. Concrete was poured 24 hours a day, five days a week, and as it hardened, the mold moved by means of a ring of hydraulic jacks. The ascending slip form gradually decreased in girth to give the tower its tapering shape.

When the tower reached the 335 m. mark, the builders made preparations for the SkyPod, a seven story structure housing two observation decks, a revolving restaurant, a nightclub, and broadcasting equipment. The SkyPod is anchored by 12 steel and wooden brackets that were slowly pushed up the tower by 45 hydraulic jacks.

The concrete tower continues above the SkyPod, ending at the Space Deck 446 m up. The Space Deck offers to the visitors a breathtaking vista from a glass-enclosed balcony. On a clear day they might be able to glimpse sites 75 miles away.

For the last phase of construction, a Sikorsky Skycrane helicopter arrived to install the tower's over 100 m. communications mast. One by one the helicopter lifted about 40 seven-ton sections of the mast to the top of the tower. When the sections were in place, they were secured by a total of 40,000 bolts. Afterward, the entire mast was covered by a fibreglass reinforced sheathing to prevent icing.

On April 2, 1975 when the OLGA helicopter lifted the 44th and final piece of the CN Tower's antenna into place, the CN Tower joined the ranks of 17 other great structures that had previously held the title of World's Tallest Free-Standing Structure.

Twenty-four years later, it is the centre of telecommunications for Toronto serving 16 Canadian television and FM radio stations, the workplace of up to 550 people throughout the year, and one of Toronto's premier entertainment destinations.

Ross McWhirter, editor of the Guinness Book of World Records, was on hand to record the milestone for history and since then, the CN Tower has received numerous mentions in the famous book including the World's Longest Metal Staircase and most recently, the World's Highest Wine Cellar.

In 1995, the CN Tower was classified by the American Society of Civil Engineers as one of the Seven Wonders of the Modern World. In 1996, the CN Tower's classification was officially changed to the World's Tallest Building and Free-Standing Structure.

The World's Tallest Building shares this designation with the Itaipu Dam on the Brazil/Paraguay border, the Golden Gate Bridge in San Francisco, the Panama Canal, the Chunnel under the English Channel, the North Sea Protection Works off the European coast, and the Empire State Building.

In past years, the CN Tower has supported its vision of Toronto's premier entertainment destination by totally renovating and redesigning 360 Restaurant, building the World's Highest Wine Cellar, and adding two new elevators.

On June 26, 1997, TrizecHahn Corporation, one of North America's largest real estate companies signed a long term operating and management lease for the CN Tower and its adjoining base lands. A $26 million entertainment expansion and revitalization opened its doors on June 26, 1998.

This massive expansion and total CN Tower revitalization plan will launch the CN Tower into the next millennium as a major international entertainment destination.

Each year, approximately 2 million people visit the World's Tallest Building to take in the breathtaking view and enjoy all of the attractions the CN Tower has to offer. While at the CN Tower, you’ll also have the chance to browse through souvenir shops.