Deep sea vents are also known as hydrothermal vents, deepwater seeps, deep sea springs or hydro-thermal vents. They are in the planet’s surface and are great submarine geysers generated because of the geothermal energy.

The hydrothermal vents are usually formed along the Mid Ocean ridges in locations where two tectonic plates are diverging; this circumstance creates a great geothermal energy that generates the hydrothermal vents, which are mainly sea water which is expelled with great pressure and high temperature, because of the magma that heated the water.

The hydrothermal vents situated near Galápagos were formed because of the split of the Farallon plate into two separate plates, the Cocos Plate at north and the Nazca Plate at the south. They are commonly more than 2438 meters (8000 feet) below the surface of the ocean.

The hydrothermal vents are flows of emerged water which are mixed quickly with several minerals like manganese, copper, zinc, iron, mineral anhydrite, and sulfides. The water emerges at temperatures that can reach 400ºC.

The hydrothermal vents; shape some times roughly cylindrical chimney structures composed by mineral particles from the thermal water flow. These chimneys reach heights of until 60 meters. Some of these chimneys expelled water of dark color; therefore they are called “black smokers”.

The most impressive about these geothermal systems is the life that they sustain. Even before the discovery of these hydrothermal vents, scientists thought that the existence of life to this deep, temperature and without sunlight was not possible.

Nevertheless, this fantastic discovery demonstrated that life can be adapted and thrive in almost any environment; the hydrothermal vent’s discovery changed forever the vision we had about the biology in the Earth.

Most organisms in the planet get its energy from the sunlight; plant cells use the sun’s energy to generate the organic compounds (carbohydrates, oxygen, etc.) and the energy that they need to survive, other organisms of upper levels in the food chain, exploit also the solar energy when they eat photosynthetic organisms or even when they respire.

Scientists knew the existence of several organisms in the deep sea; but they thought that these organisms are sustained by a nutrients rain from the upper levels of the ocean; that is to say, they depended also of the sun’s energy to survive. However, the organisms that inhabit the zone around the hydrothermal vents depend only of the resources generated by the hydrothermal chimneys.

The first link in the food chain of this system is an amazing chemosynthetic bacterium, which use sulfur compounds like hydrogen sulfide and the geothermal energy to produce energy and organic material. Most organisms of the ecosystem use these bacteria as food; that means, chemosynthetic bacterium is the base of the life in the hydrothermal vents.

Hydrothermal fluid are expelled of the vents containing hydrogen sulfide, the chemosynthetic bacterium around the vents take hydrogen sulfide, oxygen and carbon dioxide from the water. Later, bacterium use these compounds to get energy by braking down the hydrogen sulphide; with the energy generated and oxygen, the microbes convert carbon dioxide into sugars; finally, bacterium release sulfur and water. This process similar to the photosynthesis, allow to survive the bacterium and the rest of ecosystem’s organisms of the hydrothermal vents.

This marvelous unique type of ecosystem sustains a great variety of organisms such as pogonophorans, gastropods, annelids, bivalve, amongst other. All they are perfectly adapted to survive in the extreme environmental condition of the hydrothermal vents; a great example of this fact is the great number of large communities of tube worms that inhabit this ecosystem; these worms absorb nutrients directly trough their tissues in a symbiotic relationship with the chemosynthetic bacterium.

There are also blind crabs (they don’t need to see because there is not light), pink ventfish, sea cucumbers, sponges, brittle stars, around 48 mollusk species and many other unique species.

In 1977 a chemosynthetic ecosystem was discovered surrounded a set of submarine hydrothermal vents along the Galapagos Rift in the East Pacific Rise. Bu,t only two years later in 1979 a group of biologists came back to the zone to study the hydrothermal vent communities.

Scientists used to see the hydrothermal vents, an ONR research submersible called ALVIN. Thanks to this research, this same year, Peter Lonsdale published a work about the hydrothermal vent life, which showed for first time to the world the existence of this wonderful new universe.

The discovery of this new ecosystem revolutionized the biology, because it showed that the life in the Earth could exist in extreme environments and on unexpected ways. Since 1979, scientists have discovered around 300 species of life living around the hydrothermal vents. 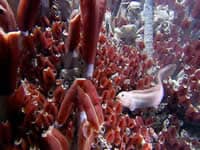 There raised questions that never entered our minds before, such as what special features do organisms have to live at hydrothermal vents? Why do different kinds of animals live different vent sites? How the animals migrate to other vent site? and many other questions.

Since 1979, several other hydrothermal vents have been discovered and studied, such as the Kermadec Arc in New Zealand that is still explored by the company Neptune Resources NL.

One of the vents discovered recently is the Medusa hydrothermal, which is located in the Pacific Ocean offshore of Costa Rica, this deep sea vent was discovered in 2007. Wherever, it looks along the ridge, it finds hydrothermal vents and the vents in different regions of the ocean host very different animals.

Nevertheless, since the discovery of the hydrothermal vents a new dilemma was born; since, these places are not only a wonderful ecosystem; they are also a new source of rich for the mining.

The great quantities of minerals that are in the hydrothermal vents could be exploited via deposition of seafloor massive sulfide deposits, as is done in Mt Isa in Queensland Australia. Several mineral explorations companies have showed its interest for the extraction of minerals directly from the hydrothermal fields.

This kind of underwater mining involves the construction of new infrastructures, which could harm seriously the delicate ecosystem around the hydrothermal vents. Therefore; more studies must be done before allowing the mining activities in these unique places; since, if the hydrothermal vents are destroyed, we will destroy also a whole universe of life, which until recently we did not know and about which we know still very little.

The preservation of the deep sea vents and the ecosystems linked to them is a responsibility of entire humanity. The major challenge of the future is to design more efficient ways of exploring the remaining 90 percent of the ocean ridge that we have not still discovered.