The Galapagos Islands are an archipelago composed by five major islands located very near equatorial line to 972 Kilometers west of continental territory of Ecuador in the Pacific Ocean.

They are considered a true natural wonder of the World. The main Islands of the archipelago are Isabella, Fernandina, San Cristobal, San Salvador and Santa Cruz. In addition to the five major islands, there are also 8 other large islands and around forty islets and smaller rocks.

The capital of the province is Puerto Baquerizo Moreno, a small city located in the San Cristobal Island. Nevertheless, the largest town of the archipelago is Puerto Ayora, which is located in the island of Santa Cruz. The total area of the islands is around 8000 square kilometers.

The archipelago of Galapagos is a province of Ecuador and its population is around 40000 people. Galapagos Islands are famous thanks to the famous scientist Charles Darwin, who visited the islands in the XIX century during the trip that inspired him to create the Theory of the Evolution and the Natural Selection.

The Galapagos Islands hosts some of the most impressive wildlife of the world; but, not only because flora and fauna of the islands is so beautiful; but, also because they have evolved without human presence, therefore they are virtually fearless of human. The isolation of the islands which are far from the continental coast of Ecuador is the main reason to this unique evolution process.

The failure of large predators, to evolve in the islands, allowed many species to prosper in these islands. Therefore the Galapagos are the home of a great variety of endemic and unique species like the sea lions, local penguins, Galapagos tortoise, Galapagos green turtle, dolphins, vampire finch, marine iguanas, lava lizards, whales, sharks, etc.

There are also a great variety of sea birds like blue-footed boobies, frigate birds, flamingos and albatrosses. The plants of Galapagos are also fascinating, the islands host a great variety of endemic Scalesia, tree ferns, bromelias, lava flows and orchids.

The Archipelago has some rare species of cotton, tomato, pepper, guava and passion flowers. The underwater life in Galapagos is also very beautiful. The islands hosts many endemic fish species and aquatic plants, therefore, Galapagos Islands are considered one of the Underwater Wonders of the planet.

An important factor in the evolution of the creatures that inhabit in Galapagos is the climate. The Galapagos archipelago has a climate unusually dry for the tropics. There are only two seasons and the temperatures of the sea range from 16 ºC (61ºF) to 28ºC (82ºF). This temperature is ideal to the endemic species of Galapagos.

The sui generis evolution process of Galapagos’s ecosystem played a key role in the development of the theory of natural selection created by Charles Darwin. Fortunately and thanks to the protection to the natural environment of the islands, the wildlife here is no less astonishing now than when Darwin visited the Galapagos.

Visitors arrived to Galapagos mainly by plane; there are guided tours available. Galapagos is probably the only place in the Earth where you can do diving with a penguin or amongst the sea lions. The Galapagos Islands are one of the most precious treasures of the planet and one of the last refuges of the wildlife in the world.

These marvellous islands were formed around 5 million years ago, because of volcanic eruptions. Several islands of the Galapagos archipelago have still active volcanoes, being the most active volcanoes in the Fernandina and Isabella islands.

The volcanic activity was generated by the interaction amongst the three tectonic plates, the plate of the Pacific, the plate of Nazca and the plate of Cocos. Because of this constant geological activity, the volcanoes in the Galapagos Islands are some of the most active volcanoes of the world. 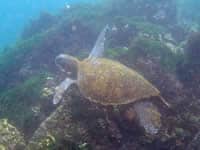 It believes the first humans that arrived to the islands were the Chimu and later the Incas who ruled in Peru and entire South America until the beginning of the XVI century.

The Europeans discovered the Galapagos in 1535 when Fray Tomas de Berlanga, the Bishop of Panama discovered accidentally the islands when he was in route to Peru. In that time, this archipelago was known as Bewitched Islands, because of the beautiful geography and biodiversity that characterize to these amazing islands. Nevertheless, one of the first maps that considered the islands, was made by Abraham Ortelius in 1570.

In this map the Islands appeared with the name of “Insulae de los Galopegos” (that means Islands of the Tortoises). Between the XVI and XVIII century the Galapagos were used mainly by pirates as base for its activities. In the XIX century the seafarers arrived to the islands. searching whales to extract oil. This exploitation put the fur seals and sperm whales near extinction.

The first scientific study in the islands was made in 1835 by Charles Darwin who arrived to Galapagos aboard the Beagle. This work was used by Darwin as evidence of his evolution theory, which was published in his famous work “The Origin of the Species by Natural Selection”. Darwin noticed that the mockingbird’s anatomy differed between different islands; the same fact occurred with the tortoises (there are fourteen distinct forms of tortoises in the archipelago).

When Darwin returned to England, he analyzed these differences; he noticed that they were due to different adaptation processes, which are one of the main pylons of the Evolution Theory.

In 1892 the Galapagos were named officially “Archipelago de Colón” in honor to Christopher Columbus. In 1934 Ecuador created the first legislation to protect the Galapagos Islands. During the World War II, the government of Ecuador, authorized the United States to establish a naval Base in Baltra, one of the Galapagos.

The islands were declared a national Reserve in 1959 to commemorate the 100th anniversary of the publication of the Origin of Species of Darwin, this same year the Charles Darwin Foundation was founded, in order to ensure the preservation of the ecosystem of the Galapagos Islands.

In 1964 the Charles Darwin Research Station is created in Santa Cruz Island. In 1973, Puerto Barquerizo Morenos, the capital of Galapagos was founded. In 1978 the islands were declared World Heritage by UNESCO, this condition was extended in 2001 to include the marine reserve around the archipelago.

Nevertheless, despite all preservation efforts done in Galapagos, there are still many threats to the ecosystem of the islands, like the introduction of foreign species of plants and animals, such as cats, feral goats, cattle as well as plants like avocado, cascarilla, citrus, amongst other; since, these species, threaten the survival of native species.

The same problem occurs in the sea; since, foreign species of fish have been introduced in the sea around the islands, endangering the existence of the endemic species. The illegal fishing is also another great threat, as well as the growing number of tourists that visit Galapagos every year.

Because of these menaces, UNESCO decided in 2007 to put the Galapagos Islands on their World Heritage in Danger List. It is necessary to make great efforts to ensure that this wonderful and unique ecosystem will not be destroyed forever.