The Chapultepec Castle, or Castillo de Chapultepec in Spanish, rises on the top of the Chapultepec Hill, where Chapultepec means the grasshopper’s hill in Náhuatl language. It is located in Mexico City, D.F. at a height of 2,325 metres above sea level and used for different purposes from Military Academy, Presidential House, Imperial Residence, and Observatory to currently, a Museum.

This magnificent and historical construction includes structures built against the slope of the hill itself, as same as walkways, gardens, exterior staircases integrated into the topography; all of them spread over 10,000 square metres.

The Castle access starts off at the foot of the hill, through a ramp that leads all the way up to the exterior gates. Most of its open areas, used in the past as military manoeuvres, are composed by many courtyards and gardens. Here, is also found the Citadel, where emerges the tower of the Tall Knight.

Furthermore, the insides of the Chapultepec Castle are luxury decorated by noteworthy paintings on the walls, and more outstanding in the foyers and halls eulogizing the wide and open areas that are symbol of the 19th and early 20th century buildings.

Its construction origins belongs to the Colonial Period, when in 1785 Viceroy Bernardo de Gálvez ordered to build a house on the top of the Chapultepec Hill, starting on August 16th of the same year with a baroque style.

Later, was Captain Manuel Agustín Mascaró who tool over the leadership of the project working at a rapid pace, but he was accused of building a fortress again the Spanish Crown. Just few months later, in 1786 he suddenly died and even when its death was suspicious there was not found evidence.

With no engineer in charge, the Spanish Crown ordered to buy it at one fifth of the total spent, but there were not buyers.

Against this, the Viceroy Juan Vicente Güermes Pacheco tried to build the General Archive of the Kingdom of the New Spain, but with no prosper the build was paralyzed. In 1803, Alexander von Humboldt visited the place condemning the sale. Finally, the building was bought three years later by the municipal government of Mexico City. 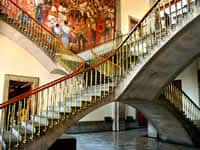 However, from 1810 to 1833, Chapultepec Castle was abandoned during the Mexican War of Independence; so that, the building was decreed to become the location of the Military Academy suffering many structural modifications including the construction of the watchtower known as Caballero Alto.

In 1847, some hero and brave children, alumnus of the Military Academy, died while they were trying to defend the building of the U.S. marines during the Mexican-American War, in the Battle of Chapultepec. In honour to that sacrifice, there is a large mural on the ceiling above the main entrance to the castle.

During the Second Mexican Empire, in 1864, the castle acquired a modern look, when Maximilian I of Mexico and his wife Empress Carlota. Both hired European and Mexican architects, who used a neoclassical style of architecture.

Besides, the Mexican Emperor ordered the construction of a boulevard connecting the Imperial residence with the city centre, and naming it Paseo de la Emperatriz. However, when Benito Juárez became President in 1867, he renamed it as Paseo de la Reforma, because of the end of the Reform War.

But, ten years later, a decree established the castle as an Astronomical, Meteorological and Magnetic Observatory, functioning for five years, though. It was the perfect reason that allowed the return of Colegio Militar, becoming also the Presidential Residence.

Finally, on February 3, 1939 the President Lázaro Cárdenas decreed that the Chapultepec Castle was going to be the Museo Nacional de Historia, being opened on September 27, 1944.