The original name of the city was lost in the time as well as the name of the civilization that constructed the city. The current name “Teotihuacan” was given by the Aztecs and it has several interpretations, being the most accepted “place of the gods” or “place where one becomes a god”.

The Avenue of the Dead is the main avenue of the city; it leads from the Moon Square to the Ciudadela, from north to south for more than 2.5 Km, dividing the city into two zones. The avenue is flanked by wonderful ceremonial buildings such as the Pyramid of Sun and Pyramid of Moon.

The Ciudadela (Citadel, named thus by Spanish who believed that it was a fort) is a great square (about 160 000 square meters) surrounded by several temples. It believes, that the Ciudadela was the religious and political center of Teotihuacan.

The largest and most impressive structure of the Teotihuacan complex is definitely the great Pyramid of the Sun. This great structure has a base of 215 by 215 meters and it is 63 meters height.

It is at the east of the Avenue of Dead in the northern part of Teotihuacan. It was originally composed by four stepped platforms a terraced platform and a superimposed temple; unfortunately the upper-most portion of the structure was totally destroyed. The excavation and reconstruction of this monument began at the beginning of the XX century by Leopoldo Batres

The Pyramid of the Moon is a beautiful building smaller than the Pyramid of the sun, located at the northern extreme of the Avenue of the dead. This Pyramid dates from 200 AD. This pyramid has a platform at top, which was used to do ceremonies in honor to Chalchiutlicue, goddess of the water and the moon.

The origin of this place and the civilization that built it is very mysterious; many archeologists think that it was a Toltec work. Nevertheless, the Toltec civilization reached its apogee long time after the Teotihuacan’s creation.

Another theory proposes that the eruption of the Xitle volcano caused a massive emigration from the central valley to the Teotihuacan valley creating a new multiethnic culture; therefore; it believes that the city was inhabited by several different ethnic groups amongst them Otomi, Totonac, Nahua, Zapotec, Mixtec and Maya people.

The evidence of this theory is the variety of architectural influences that it can see in the different areas of Teotihuacán. 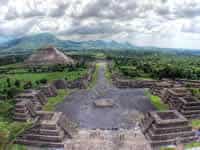 The oldest building of Teotihuacan dates from the 200 BC while the great Pyramid of the Sun was finished around 100 AD.

Teotihuacan reached its apogee from 150 to 450 AD being the largest city of America and the sixth of the world during its peak in the five century. The city hosted 150 000 inhabitants in its greatest splendor.

There are evidences of cultural interchange between Teotihuacan and the centers Mayas during this period, like the architectural style of Teotihuacan (known as “talud-tablero”) which can be found dispersed in all Mesoamerica.

Teotihuacan was an industry center which produced pottery and jewelry; many tools of obsidian found in the city are evidences of this fact. There are not texts in Teotihuacan because apparently the inhabitants of this city did not know the writing.

Nevertheless, Maya inscriptions found in Honduras and Guatemala refer to a great King that ruled over Tikal and Uaxactun who reigned in a city whose description fits very well with Teotihuacan’s description, which is another evidence of the great power and influence reached by Teotihuacan.

The collapse of the Teotihuacan’s civilizations occurred between the VII and VIII centuries. Initially scientists thought, Teotihuacan was invaded and destroyed by other civilizations like the Toltecs. Nevertheless, today there are evidences of a great internal rebellion against the high social class of the city.

The decline of Teotihuacan would has been caused by climates changes which produced an agricultural disaster that caused hunger and despair among the population, weakening the power of the ruling class.

Then other cultural centers such as Cacaxtla, Xochicalco or Cholula took the power vacuum left by Teotihuacan. However, Teotihuacan was still a respected site, when Aztecs occupied the zone, they built a new city over the remains of Teotihuacan, but they considered Teotihuacan an important religious and ceremonial center. Aztecs were who created most mythical stories about the origin of Teotihuacan and its creators.

During the colonial period Teotihuacan was forgotten, like most pre-Colombian centers of the New World. But, the interest for this archeological center was reborn in the XX century, when the first archeological excavations began.

Today, Teotihuacan is the largest and most famous pre-Colombian complex of Mexico and one of the most wonderful places of the world.