The famous Mayan pyramids of Chichen Itza (chee-chehn eet-sah) in Maya literally means: "Mouth of the well of the Itza", the name Chichen Itza is a Mayan word: CHI (mouth), CHEN (well) and ITZA (of the Itza tribe), it is located a 75 miles east of Merida, the Capital of the State of Yucatan, Mexico. This archaeological site is rated among the most important of the Maya culture and covers an area of approximately six square miles.

The architectural characteristics of Chichen Itza and that have a direct relationship with the Mayan Toltec style are: "El juego de la Pelota", "El Castillo", "El Grupo de las Mil Columnas", "El tzompantli", El Edificio de las Aguilas", "El templo de los Guerrerros", and "El Mercado". All of these buildings have the same decoration motives found in Tula. The most frequent representations are warriors and Quetzalcoatl.

The main attraction is the central pyramid, a square-based, stepped pyramid that is approximately 75 feet tall, El Castillo de la Serpiente Emplumada, which means "Castle of the Plumed Serpent," and is pictured at the top. The plumed serpent is a popular deity in various Mesoamerican cultures. "El Castillo" is surely the place where the ceremony of the descent of Kukulkan was held. The pyramid has special astronomical layout so that a game of light and shadow is formed. On March 21st the body of the serpent metaphorically descends from the temple on top of the pyramid and arrives at the heads at the foot of the staircase.

Just beyond El Castillo you will find a large ball court where Mayan men played a game called pok ta pok. Anthropologists believe that the object of the game was to hurl a ball through a ring that was mounted on a wall, seven meters above the ground. The largest Ball Game in Mesoamerica is 168 meters in length and 70 meters in width.

The Temple of Chac Mool, upon whose walls and interior pillars there are richly colored carvings of plumed serpents, warriors, and priests. The upper building only partially reflects its true grandeur. There are three sculpted masks with extremely long noses on the outer walls and at the corners. On the inner walls of the vaults there were murals with scenes of war and daily life. The altar tables and benches may have served as seats and thrones for dignitaries.

In the "Templo de los Guerreros" there is a temple on the top part where the entrance columns are typically Toltec. Another one of the buildings that have a Toltec seal without is the "Muro de los Craneos". These buildings were destined to be the mausoleums of the tying up the years. Every 52 years the ancient Mayans and other cultures would tie up a sheaf of years to end a cycle. Platform of Venus or of the Dance, Sacred Well or the Well of the Sacrifices, Tzompantli, that displays figures of skulls in relief.

In the Central Group of the Ruins you can find:

The Red House or Chichan Chob, the name of this building, situated upon a high platform, is derived from the fragments of red paint that were found in its interior. The word "Chichan Chob" means "small holes" and probably alludes to its Lime roof comb. The structure is comprised of an antechamber and three rooms and has a sculptured hieroglyphic inscription in the main chamber. The building must have had a religious and public use, since there is a Ball Court joined to its eastern side, with bas-reliefs in the Maya-Toltec style.

The Caracol or Observatory This structure is known as the Observatory due to its shape and some possible astral associations, since astronomical events concerning the planet Venus and the setting of the sun during the three windows in the upper section. The name "Caracol" (conch) comes from the spiral stairs that lead to the upper part of the building.

The Church, This small building with only one chamber owes its name to its proximity to the so called "convent" of the Nunnery and to the exuberant decoration on its upper facade, which rises even higher due to its lofty roof comb. One can observe large areas covered with the original stucco on the Grecian frets of the central panel. "Bignosed" masks constitute the main element of the facade, with a seated figure, god or ancestor integrated upon the nose of the central mask.

There also are figures of the four carriers of the corners of the sky, "bacabes" or "pauahtunes", kneeling in the side panels. It’s appearing that the builder had certain difficulties in placing the three large masks rescued from earlier buildings on the roof comb and opted to suppress detail. Up to now, it is not known what the function of this building was, and in spite of the overloaded decoration of the building, it is one of the best architectural examples of the Puuc style in Chichen Itza.

Temple of the Carved Panels, the name of this building comes from the relieves carved on the north and south walls of the colonnade, depicting scenes of numerous people, plants, and animals, both real and imaginary, which are dominated by two warriors. The building is made up of a temple erected on a slab foundation with a colonnade in front of it. The offerings discovered during exploration of the fire - related rituals.

All areas can be seen comfortably in one day. Also you should enjoy the wonderful Light and Sound Show that is held every evening. At the entrance to Chichen Itza, there is an informative museum, a dining room, clean restrooms, a few gift shops and vendor stands.

Chichen Itza was first populated between 500 and 900 AD by Mayans and for some reason abandoned around 900; the city was then resettled 100 years later and subsequently invaded by Toltecs from the North. There are numerous relieves of both Mayan gods including Chac and the Toltec gods including Quetzacoatl. For some reason the city was abandoned around 1300. If the Spanish did not make it a policy to kill all of the Mayan priests and burn books when they arrived in Mexico, we would all have a few more answers.

The ruins are divided into two groups. One group belongs to the classic Maya Period and was built between the 7th and 10th centuries A.D., at which time the city became a prominent ceremonial center. The other group corresponds to the Maya Toltec Period, from the later part of the 10th century to the beginning of the 13th century A.D. This area includes the Sacred Well and most of the outstanding ruins. 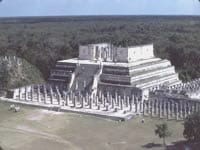 When Chichen-Itza was first settled it was largely agricultural. Because of the many cenotes in the area, it would have been a good place to settle. During the Central Phase of the Classic Period, referred to as Florescence, (625-800 A.D.) arts and sciences flourished here. It was at this time that Chichen-Itza became a religious center of increasing importance, evidenced by the buildings erected: the Red House, the House of the Deer, the Nunnery and its Annex, the Church, the Akab Dzib, the Temple of the Three Lintels and the House of Phalli.

Toward the end of the Classic Period, from 800 to 925 A.D., the foundations of this magnificent civilization weakened, and the Maya abandoned their religions centres and the rural land around them. New, smaller centres were built and the great cities like Chichen Itza were visited only to perform religious rites or bury the dead. The Itza people abandoned their city by the end of the 7th century A.D. and lived on the west coast of the peninsula for about 250 years. However, by the 10th century A.D. they returned to Chichen Itza.

Around 1000 A.D. the Itza allied themselves with two powerful tribes, Xio and Cocom, both claiming to be descendants of the Mexicans. This alliance was favourable to the Itza for about two centuries. During this time, the people of Chichen Itza added to the site by constructing magnificent buildings bearing the touch of Toltec art: porches, galleries, colonnades and carvings depicting serpents, birds and Mexican gods.

The Toltec influenced the Itza in more ways than just architecture. They also imposed their religion on the Itza, which meant human sacrifice on a large scale. They expanded their dominions in northern Yucatan with an alliance with Mayapan and Uxmal. As the political base of Chichen Itza expanded, the city added even more spectacular buildings: the Observatory, Kukulkan's Pyramid, the Temple of the Warriors, The Ball Court, and The Group of the Thousand Columns.

The Temple of the Warriors has pillars sculptured in bas-relief, which have retained much of their original colour. Murals once adorned its walls. It is surrounded by numerous ruined buildings known as the Group of a Thousand Columns. In 1194, Mayapan broke the alliance and subdued Chichen and Uxmal. The city was gradually abandoned.