The Panama Canal is a major ship canal that traverses the Isthmus of Panama in Central America, connecting the Atlantic and Pacific Oceans. Construction of the canal was one of the largest and most difficult engineering projects ever undertaken.

It has had an enormous impact on shipping between the two oceans, replacing the long and treacherous route via the Drake Passage and Cape Horn at the southernmost tip of South America.

The 50 miles long (80 km) international waterway known as the Panama Canal allows ships to pass between the Atlantic Ocean and Pacific Ocean, saving about 8000 miles (12,875 km) from a journey around the southern tip of South America, Cape Horn. The Canal itself is made up of the Gaillard Cut channel and the artificial Gatun Lake. The lake was formed by the damming of the Chagres River.

The narrowest part of the Canal is the Culebra Cut, which extends from the far north of the Pedro Miguel Locks to the southern tip of Lake Gatun in Gamboa. This segment, approximately 13.7 km long, was dug through rock and limestone of the Cordillera Central. The maximum size of vessel that can use the canal is known as Panamax; an increasing number of modern ships exceed this limit, and are known as post-Panamax or super-Panamax vessels.

Since opening, the canal has been enormously successful, and continues to be a key conduit for international maritime trade. The canal can accommodate vessels from small private yachts up to large commercial vessels.

For every ship that passes the canal is used about 197 million litres of fresh water, which flows by gravity through the locks and dumped into the ocean. The Canal operates 24 hours a day, 365 days a year, providing transit service to ships of all nations without discrimination.

The earliest mention of a canal across the Isthmus of Panama dates back to 1534, when Charles V, Holy Roman Emperor and King of Spain, ordered a survey for a route through Panama that would ease the voyage for ships travelling to and from Spain and Peru. During his expedition of 1788–1793 Alessandro Malaspina demonstrated the feasibility of a canal and outlined plans for its construction.

An all-water route between the oceans was still seen as the ideal solution, and the idea of a canal was enhanced by the success of the Suez Canal. The French, under Ferdinand de Lesseps, began construction on a sea level canal through what was then Colombia's province of Panama, on January 1, 1880. The French began work in a rush with insufficient prior study of the geology and hydrology of the region.

In 1885, due to the tremendous problems encountered in trying to excavate a sea-level canal, the plan was changed to include a single, temporary lock and other adjustments in order to speed up the availability of the canal for traffic. Still, it was of no use.

Among other problems, sea level on the Caribbean side of Panama is lower than on the Pacific side. In addition, disease, particularly malaria and yellow fever, sickened and killed vast numbers of employees, ranging from labourers to top directors of the French company. These conditions made it impossible to maintain an experienced work force as fearful technical employees quickly returned to France. 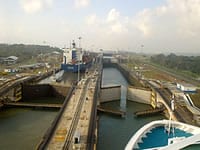 The appraisal of the company's belongings including equipment, maps, and the value of the land already excavated was very high, and in 1894, a new company, the Compagnie Nouvelle du Canal de Panama, was created in France to attempt to finish the canal.

All involved thought of this as an impossible feat by the French, and ideas ran strong to sell the Canal Zone possibly to the United States.

In 1899 the US Congress created an Isthmian Canal Commission to examine the possibilities of a Central American canal and to recommend a route. The commission first decided on a route through Nicaragua, but later reversed its decision.

In November 1903, Phillipe Bunau-Varilla, Panama's ambassador to the United States, signed the Hay-Bunau Varilla Treaty, granting rights to the United States to build and indefinitely administer the Panama Canal. Bunau-Varilla, although serving as Panama's ambassador, was a French citizen, and was not authorized to sign treaties on behalf of Panama without the review of the Panamanians.

The United States, under President Theodore Roosevelt bought out the French equipment and excavations for US$40 million, and began work on May 4, 1904, after helping Panama achieve the separation from Colombia by deploying troops and naval forces to stop Colombia from stopping the rebellion against Colombian governance, created by the United States of America.

The United States paid Colombia $25,000,000 in 1921; seven years after completion of the canal, for redress of President Roosevelt's role in the creation of Panama, and Colombia recognized Panama under the terms of the Thomson-Urrutia Treaty.

Chief Engineer (1905–1907), John Frank Stevens', primary achievement in Panama was in building the infrastructure necessary to complete the canal. He rebuilt the Panama Railway and devised a system for disposing of soil from the excavations by rail. He also built proper housing for canal workers and oversaw extensive sanitation and mosquito control programmes that eliminated yellow fever and other diseases from the Isthmus.

With the diseases under control, and after significant work on preparing the infrastructure, construction of an elevated canal with locks began in earnest and was finally possible.

The Americans also gradually replaced the old French equipment with machinery designed for a larger scale of work, quickening the pace of construction, President Roosevelt delivered medals for all workers who spent at least two years in the building to commemorate their contributions to the construction of the canal. These medals featured Roosevelt's likeness on the front, the name of the recipient on one side, and the worker's years of service, as well as a picture of the Culebra Cut on the back.

The building of the canal was completed in 1914, two years ahead of the target date of June 1, 1916. The canal was formally opened on August 15, 1914 with the passage of the cargo ship Ancon.

By the 1930s it was seen that water supply would be an issue for the canal; this prompted the building of the Madden Dam across the Chagres River above Gatun Lake. The dam, completed in 1935, created Madden (later Alajuela) Lake, which acts as additional water storage for the canal.

After the war, United States' control of the canal and the Canal Zone surrounding it became contentious as relations between Panama and the U.S. became increasingly tense. Many Panamanians believed that the Canal Zone rightfully belonged to Panama; protests as well as the increased military presence.

Negotiations toward a new settlement began in 1974, and resulted in the Torrijos-Carter Treaties. Signed by President of the United States Jimmy Carter and Omar Torrijos of Panama on September 7, 1977, this set in motion the process of handing the canal over to Panamanian control for free as long as Panama signed a treaty guaranteeing the permanent neutrality of the canal (Neutrality Treaty) and allowed the U.S. to come back anytime.

Though controversial within the U.S., the treaty led to full Panamanian control effective at noon on December 31, 1999, and control of the canal was handed over to the Panama Canal Authority (ACP).