Arequipa also known as the “Ciudad Blanca” (“White City”) is the capital of the region of the same name. Arequipa is the second most populous city of the country with around 749 291 inhabitants.

The city is located in the southern Andes of Peru at 2325 metres above sea level (8792 feet), at the foot of three volcanoes, the famous Misti, the Chachani and the Pichu Pichu.

It is in middle of a volcanic zone; therefore, most colonial buildings of the Downtown are constructed with sillar, a white volcanic rock, which is the reason of the nickname of the city. But, these volcanoes are also a great danger; since, the city has been destroyed several times by great earthquakes.

The city has a nice climate with around 300 sunny days per year. The average temperatures fluctuates between 10ºC (50ºF) and 24ºC (75.2ºF). Most rainfalls in the city are drizzles and they occur between January and March.

The best time to visit the city is between May and September, because during this time the climate is sunny and dry in the mornings, but can be cold at night. Besides, in August, the city celebrates its anniversary, therefore there are a great number of festivals, cultural events and nice shows. 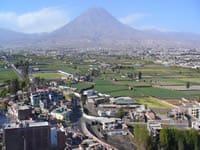 The area of the city has been inhabited since 7600 BC.

One of the first civilizations that lived in this region was the Collagua tribe, which inhabited the region until the XIV century when the region was conquered by the Inca Empire led by the Inca Mayta Capac, who ordered the foundation of the first settlement in the current place that occupies the city. In that time the city was an important supplier of agrarian products.

The current city was founded on August 15, 1540 by Garci Manuel de Carbajal, an emissary of the leader of the invasion of Peru Francisco Pizarro. During the colonial period, the city was an important intermediate point of the caravans that transported silver from the mines of Potosi in Bolivia to the port of Callao in Lima.

The city was relatively isolated during all the colonial time, but in 1870, it was constructed the southern railroad that connected Arequipa with the Mollendo port. This railway was one of the main causes of the development of the city during the XX century.

The city became an important cultural and industrial center, being today the second most important economic center after Lima; therefore, the city hosts some of the main factories and enterprises of the country. It is also the seat of the San Agustin University, one of the most recognized state universities of the country.

The city has several tourist attractions like the beautiful churches of sillar of the historic center such as the Cathedral, the “Compañia de Jesús”, “Santo Domingo”, the “Santa Catalina Monastery”, amongst other. Besides all the historic center of Arequipa is part of the list of World Heritage of UNESCO.

It highlights also, the Goyeneche Palace, the Riquets house and the Yanahuara district. But, probably the greatest tourist attraction of the region is the wonderful Colca Valley, which is the second deepest canyon of the world after the Cotahuasi canyon (which is also in Peru). The Colca canyon is one of the most beautiful natural places of Peru.

It is also one of the last refuges of the Andean condor, the biggest flying bird of the world and a sacred animal for the ancient Peruvians.

Arequipa has an important tourist infrastructure, which includes hotels, bars, discos, nightclubs and excellent restaurants. Peru is famous in the world by its delicious dishes and Arequipa is perhaps the city where better one eats in Perú.

The typical dishes of Arequipa, such as the “Rocoto Relleno” (stuffed hot red pepper covered with melted cheese), the “Chupe de Camarones” (a delicious soup of river’s shrimps) or the delicious pope cake, are amongst the most exquisite delicacies of the world.

Arequipa is connected to the rest of the country by several roads and highways like the Pan-American Highway that connects to Arequipa with the entire Peruvian coast. Besides, the airport of Arequipa, named Rodriguez Ballon Airport receives local flights from cities such as the Cusco and Lima.

Arequipa is a city that combine history with modernity. It is a nice destination to visit in Peru.