The capital of the province is Barranca City, a town located 193 kilometers north Lima in the Barranca bay. This province occupies 1 355.87 square kilometers and is divided into 5 districts: Barranca (district), Paramonga, Pativilca, Supe, Supe Port. Barranca’s population is around 137 689 inhabitants.

This region has been inhabited since many centuries ago, by diverse civilizations. Many archeologists think that this region was the crib of the civilization in America, since there are several remains of cities, which dates from 5000 years ago.

The region was later occupied by many pre- Inca civilizations such as Chavin, Mochica or Chimu. During the Inca period this region was part of Chinchaisuyo province, one of the 4 provinces of the Tawantinsuyo (the original name of the Great Inca Empire). 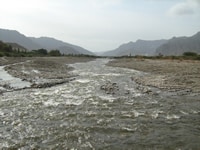 During the colonial time, this region did not have a great significance.

The current province was created in 1823 and its name derives from the native word “Karanka”, that means “city”. Currently, the main activities of the Barranca province are the commerce, the fishing and the agriculture.

This province has some big tourist attractions. The ancient city of Caral is without doubt, its most important attraction. It is located in the Valley Supe (23 Kilometers from Supe Town), which is near the capital of the province.

The archeological complex of Caral is considered the oldest city of America and one of the oldest cities of the world; since, this city was founded around 3000 years BC. The discovery of Caral changed totally the perception of the Peruvian history and the American culture.

Another attraction of Barranca is the Fortress of Paramonga, a pre-Inca construction located in the north of the province to 209 kilometers from Lima. This settlement was occupied both by Chimu and by Incas between XII century and XVI century.

The Town of Supe is also a nice place in the Barranca province. It is a town dedicated to the commerce, the agriculture and the fishing. The best day to visit this small town is on June 29, when it celebrates the fisherman’s holiday.

Barranca is very near Lima city; therefore, it is very easy to reach this province; because, it is about one hour half from Lima by car, through the Pan-American Highway. Barranca is a great destination to learn about the history of the civilization in the New World.