Cajamarca is the capital of the region of the same name. It is located in the northern Andean region of Peru. Cajamarca city is about 2719 m (8920 feet) over sea level.

Cajamarca has a mild climate quite dry and sunny during all the year. Average temperatures fluctuate between 5ºC (41ºF) and 21ºC (70ºF). Most rainfalls occur from October to April.

The main economical activities of the region are the mining, agriculture and the cattle raising. It highlights the extraction of copper and gold. The tourism is also an important activity, mainly in the hot springs of the “Baños del Inca”; where around 4000 visitors arrive every day to enjoy the therapeutically mineral waters. 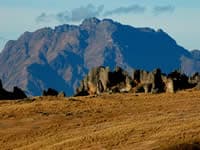 The first vestiges of human presence in the region date from 3000 BC. There are also some remains of the Chavin culture (the oldest civilization of Peru) in the archeological sites of Cumbe Mayo and Kuntur Wasi.

Later the region was occupied by the Caxamarca civilization (whose name generated the current name of the region) that ruled until the Inca conquest in the XV century, during the government of the Great Inca Pachakuteq.

During the Inca period Cajamarca became an important administrative, military and religious center in the north of the Tawantinsuyo (the native name of the Inca Empire). Incas constructed several temples and palaces in Cajamarca.

One of the most famous Inca structures in Cajamarca is the place known as the “Baños del Inca” (Inca Baths or Bath of the Inca). This place is a set of pools constructed around some hot springs. Incas used these thermal fountains to relax. Besides, it believes that the minerals of these hot springs have therapeutically properties.

Cajamarca is also famous because it was the place where Spaniards leaded by Pizarro started the invasion of Peru. Another important archeological place of Cajamarca is the “Cuarto del rescate” (Room of the Ransom).

According to the history when Spaniards took prisoner to Atahuallpa, this offered one room full of gold and two rooms full of silver as ransom; if Spaniards released him. Atahuallpa kept his promise; but, Spaniards did not and they killed Atahuallpa.

The city has several tourist attractions such as the “Baños del Inca”, the pre-Inca necropolis of “Ventanillas de Otuzco”, the ancient aqueduct of “Cumbe Mayo” or the waterfalls of “Llanacora”. Cajamarca has also a nice Etnographic and Archeological Museum, which is located in the old Hospital of Women.

Another nice place at Cajamarca is the “Granja Porcón” (Porcon Farm), a dairy farm where travelers can take part in farming chores. Because of the pre-Hispanic and colonial monuments of Cajamarca; this city has been declared “America Heritage Site” by UNESCO.

Probably the best time to visit Cajamarca is during carnivals. The Cajamarca’s carnival is one of the most famous and colorful festivals of Peru. It is a festive time in the entire region. All the neighborhoods and institutions of the city participate actively in the celebrations.

There are many festivals, typical dances and local food as well as music shows. The celebrations last around one month, but, the week before the carnival is the period that concentrates most activities.

It can reach Cajamarca by car or by plane. There are daily flights from Lima that arrive to the Cajamarca’s Airport. Most buses arrive to Cajamarca from Trujillo. The long distance bus service in Peru is very nice. The buses are very luxury and have bus hostess, bathroom and bar. The trip between Lima and Cajamarca lasts around 16 hours.

Cajamarca is a nice Andean city that offers many beautiful attractions.