Iquitos is the largest and most important city of the Peruvian Amazon Rain Forest. It is also the main Peruvian port on the banks of the Amazon River.

The city is the capital of the Peruvian region of Loreto, which is located in the northeastern zone of the country. Iquitos is to 125 Kilometers (78 miles) from the confluence of the Marañon and Ucayali rivers, the point where the Amazon River takes officially its name.

Iquitos is the most populous city of the Peruvian Rain Forest. Its population is around 370 962 inhabitants. The city like all Amazonian region has a humid and warm climate with temperatures that fluctuate between 15ºC (59ºF) and 38ºC (100ºF).

There are many rainfalls all the year; however, most precipitations occur between November and March. The average humidity is about 85%. 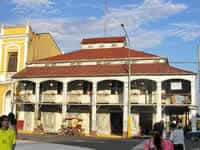 The city is a paradise for the lovers of the nature and the ecotourism, because of its exuberant greenness full of wildlife and the nice native communities, there are around the city such as Ticunas, Boras, Cocamas, Witotos, etc.

A great part of the current inhabitants of Iquitos are descendents of these tribes therefore, they are very noble, funny and cheerful.

Iquitos was established in 1750 as a Jesuit mission created to convert to Catholicism the native tribes of the region. Step by step the city was growing.

In 1864, some decades after the Peruvian Independence of Spain, the city became the capital of the administrative region of Loreto, which is still the largest region of Peru. Nevertheless, the great growing of the city occurred at the beginning of the XX century; because of the rubber boom.

In that time Iquitos became one of the main ports to export the rubber to Europe through the Amazon River. During this period, the city experienced a great urban development.

Many mansions were constructed in Iquitos, including a unique house of iron designed by Gustave Eiffel, the famous French engineer that constructed also the Eiffel Tower in Paris. The house was sent unassembled to Iquitos where it was assembled and put in its current location in the main square of the city. However, the rubber boom lasted only some decades and the city lost its status rapidly.

Currently the main economic activity of the city is the trade of wood extracted of the rain forest. Unfortunately this activity is damaging the jungle (the Amazonian jungle constitutes 10% of all world’s forests), destroying the main lung of the planet.

The tourism is the other activity of the region; therefore, Iquitos has a complete tourist infrastructure that includes good hotels, nice restaurants and other modern amenities for the visitors. The main attraction of the city is without doubt the Amazon River; nevertheless, there are also other nice tourist places, such as the natural national Reserve of “Pacaya Samiria” (an important refuge for the Amazonian wildlife) or the Belen neighborhood, which is literally over the Amazon River and is reminiscent of Venice.

There are also available several tours to explore the Rain forest around the city.

A peculiar detail about Iquitos is that it is considered the most populous city of the world that cannot be reached by road. It can reach Iquitos only by ship, using the Amazon River or one of its tributaries or by plane from Lima.

Iquitos is served by the Francisco Secada International Airport, which receives mainly local flights from Lima and some international flights. Iquitos is one of the most beautiful destinations of Peru and a city that worth visiting.