Lambayeque is one of the regions of the coast of Peru located at northwest of the country, around 750 Kilometers at north of Lima, the capital of Peru.

The region has borders with Piura at north, the Pacific Ocean at the west, Cajamarca at the east and La Libertad at south. The region is administratively divided into 3 provinces: Chiclayo, Ferreñafe and the province of Lambayeque. The city of Chiclayo is also the capital of the region and one of the largest cities of Peru.

Lambayeque occupies around 16 585 square kilometers and its population is around 1091535 inhabitants. The climate of the region is semitropical, being the average temperature 22.3 ºC (72.1 ºF) approximately. Nevertheless, in summer the temperature can reach until 32ºC (89.6ºF). Usually, there are not rainfalls in the region. 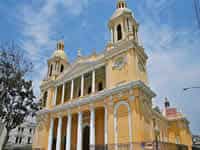 The Lambayeque region has been inhabited since many centuries ago by several civilizations such as Moche and Chimu.

According to an ancient legend, the first civilization of the region was founded by Naylamp, a mythical personage that arrived to this region on board rafts of reed from the Pacific Ocean and created the culture of northern Peru.

The Chimu people ruled in Lambayeque until XV century, when they were conquered by the Great Inca Empire. The Chimu civilization was characterized by its great skill in metalworking.

Chimu people were able to create beautiful and complex shapes in several metals, such as gold, silver or bronze. The greatest evidence of the ability of the Chimu to the metallurgy was found in the Tomb of the Lord of Sipan, which is the tomb of an ancient regent of the region. This tomb was found with its content intact.

The tomb was full of many items of gold, silver and gems. The Tomb of the Lord of Sipan is one of the most impressive legacies left by the ancient Peruvians.

During the colonial period, Lambayeque was an important province of the Spanish viceroyalty of Peru and the city of Chiclayo was after Trujillo the most important city of the north of Peru. Since then, the region was the most important zone of sugar’s production. Currently around 50% of Peru’s sugar production comes from Lambayeque.

The most important city of the region is Chiclayo, a nice city, also known as the “Friendship City”. The city has several tourist attractions, being the most important, the Tomb of the Lord Of Sipan, which is located to 35 Kilometers from Chiclayo.

Besides, near Chiclayo, there are several beautiful beaches and ports such as Eten and Pimentel. This region is also famous because of the beauty of its women, which are considered as the most beautiful women of Peru.

Another important city of the region is Lambayeque city, which has several museums that save many objects belonged to the civilizations that inhabited the region in the pre-Colombian period, such as Vicus, Chimu, Mche, Inca. It Highlights the Brúning Museum and the “Tumbas Reales of Sipan” Museum.

The region is also famous by its food. It highlights the seafood, the “Cabrito a la norteña” (a dish of goat’s meat) and a milky candy known as “King Kong”. It can reach Lambayeque by car, by plane or by ship.

The region is connected to the capital of the country through the Pan-American Highway. The Airport of Chiclayo receives local flights, mainly from Lima. Probably the best time to visit Lambayeque is on April 18, during the anniversary of foundation of Chiclayo.