Madre de Dios is the most southeastern region of Peru; it is located in the border with Brazil and Bolivia. The region is covered almost entirely by the Amazon jungle.

The name of the region is one of the denominations (in Spanish) of the Virgin Mary and means “Mother of God”. The region is divided into three provinces Manu, Tahuamanu and Tambopata; where it is the capital of the region, Puerto Maldonado city.

Madre de Dios is one of the regions less populated of the country with only 92 024 inhabitants, being the population density 1.1 inhabitants per square kilometer.

Like most regions of the Amazon jungle, the region of Madre de Dios has a climate very hot and humid with frequent rainfalls during all the year. 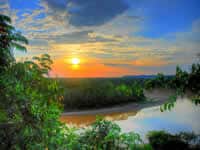 The regions is crossed by a great number of rivers whose waters eventually flow into the great Amazon River.

Amongst these rivers are the Heath river, the Tambopata river, the Madre de Dios river and the Manu river, around which is the National reserve of Manu, the most bio-diverse natural park of the world and probably the greatest symbol of Madre de Dios.

The region’s economy depends mainly of the mining and the agriculture. Madre de Dios produces Brazil nuts, Coffee, Sugarcane, Cacao and Palm oil. Gold mining is the only important industry of the region. It is developed in the banks of the Madre de Dios and Iñambari rivers.

Unfortunately, the extraction of gold is made with artisanal methods, which use mercury to extract the gold, this activity is seriously polluting rivers and endangers the flora, fauna and human population of the zone.

The production of wood is also an important activity in Madre de Dios; but it is also a great problem; because the cut of trees is causing the deforestation of large zones of Amazon jungle; which are the natural habitat of several species of birds, mammals and insects.

The region has several natural paradises, which are its major attractive; being the world famous Manu National Park , the Natural Reserve of Tambopata-Candamo, the National Park Bahaja Sonene and the National Sanctuary Pampas del Heath the main landmarks of Madre de Dios. Another attraction of the region are the aborigine tribes that live in the zone.

The capital of the Region, Puerto Maldonado is a small city, which was founded in 1902 in the peak of the rubber boom in Peru. The city was named in honor to Faustino Maldonado, who explored the region in 1861.

It is the main hub of the region; since, it has the only airport of the region, which receives flights from Cusco (45 minutes) and Lima (90 minutes). The city is connected to the rest of the country and Brazil , through the Interoceanic Highway, which is still under construction and will allow connect to Brazil with the Peruvian Pacific coast.

Madre de Dios is a beautiful Peruvian region in the Amazon that owns a great number of wonders to offer to the visitors.