The city of Nazca is a district of the Nazca province in the Peruvian Region of Ica; which is located in the southern coast of the country to 402 kilometers (250 miles) from Lima, the capital of Peru.

This city is very famous because of the world known Nazca Lines; a set of enigmatic giant geoglyphs, created on the desert, by the ancient inhabitants of Nazca around 2000 years ago. These lines represent geometrical shapes, animals, plants and humans.

There are some theories that attribute the origin of the lines to beings from other planets. Nevertheless, the evidence indicates that the lines were made by the ancient Peruvians. Nazca has a small airport, where it can get a plane to admire the Nazca lines from the air. 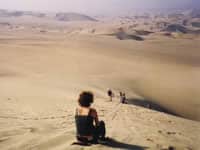 The city is surrounded by an impressive desert which is full of beautiful dunes, like Cerro Blanco, which is the largest dune of the country.

One of the most exciting experiences in Nazca is to cross the dunes using a sand buggy. There are several places in the city where it can rent one of these vehicles. Besides, like all Peruvian cities, Nazca offers a great variety of delicious food.

There are many restaurants in the city where it can enjoy the exquisite Peruvian meals, mainly the seafood which is very fresh and tasty, because of closeness of the sea. Nazca has also many excellent beaches such as Playa Hermosa, La Lobera, La Libertad, Yanayarina.

Nazca city was founded by Spaniards in 1591 in a nice valley, which was inhabited for several centuries by Peruvians civilizations such as the Paracas, the Nazcas and the Incas; in that time the city was called Nanasca. Therefore, there are several archeological sites near Nazca like the Citadel of Cahuachi, the pre-Colombian cemetery of Chauchilla or the Incan aqueduct of Cantayoc.

The city has also a Municipal Museum that shows a nice collection of items belonged to the ancient civilizations of the region. Besides very near Nazca is the Punta San Juan Natural Reserve, which hosts a large colony of Humboldt penguins, sea birds and sea lions. Another landmark of Nazca is Sacaco, a rich location of fossil remains to 100 Kilometers from Nazca city.

It can reach Nazca by car from Lima or Ica using the Pan-American Highway, which cross the Peruvian coast from north to south. Besides, there is a transverse highway that connects to Nazca with cities such as Cusco and Abancay in the Andes and Puerto Maldonado and the border with Brazil in the Amazon jungle.

There is also a small airport named “Maria Reiche Neuman”; but, it receives mainly small planes that flight over the Nazca Lines.

Nazca is a nice city with gentle people whose main activities are the agriculture and the tourism (mainly in the last years). It is one of the main destinations of Peru and a place that worth visiting.