Pasco is a region of Peru located in the centre of the country at east of the western Andes. The region has Andean zones and Amazon jungle zones. It estimates that its population is around 277 475 people. Its capital is the city of Cerro de Pasco. The Pasco region has borders, with Huanuco at north, Junin at south, Ucayali at east and Lima at west.

The Andean zone of the region has a climate very dry and cold with average temperatures of 15 ºC (59ºF) during mornings and 0ºC (32ºF) at night. There are rainfalls between November and March, including occasional hailstorms and snow.

There are also strong winds in the afternoons. Nevertheless, the climate is quite different in the low zones of the region. For example, the Oxapampa province has a tropical climate more wet and warm with an average temperature of 18ºC (64.4ºF). 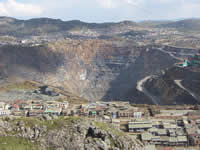 Pasco region has been inhabited by humans since 10000 years ago. However, the first civilizations appeared in the zone around 200 BC, when all the central region of Peru was ruled by the Wari civilization.

During the XV century the region was conquered by the Great Inca Empire. Since this time, the region was known as an important source of minerals such as gold, silver and cooper. When Spaniards invaded the country, they exploited also the mines of Pasco during all colonial period.

In the XX century began the industrial exploitation of the mines of Pasco. Great mining companies were established in Pasco and mainly in Cerro de Pasco; therefore this region is considered still now, the Mining Capital of Peru. The extraction of cooper in the Pasco’s mines is the main economic activity of the region and one of the most important sources of incomes of the country.

Pasco has several beautiful places that attract many visitors. One of the most famous landmarks of Pasco is the Huayllay Stone Forest, a geologic marvel that is considered one of the wonders of Peru.

Other attractions of Pasco are: the Lake Punrun, the Church of the Immaculate Conception in Vicco, the Church of San Pedro de Ninacaca, the Thermal Waters of Calera and the Huaguruncho Glacier.

The largest city of the region is the capital Cerro de Pasco, which has around 70000 inhabitants. It is one of the main mining centers of Peru and one of the cities located at higher altitude in the world. Cerro de Pasco is at 4338 metres (14 232 feet) above sea level. Around this city there are several mines of cooper and zinc.

Unfortunately the exploitation of the mines has generated pollution and the destruction of most watershed and natural ecosystems around the city. It is especially worrying the contamination generated by lead, which is affecting seriously the people’s health, mainly children.

During long time the football stadium of the city was seat of the professional football matches played at highest altitude in the world; since, the Union Minas football Club played as local in this city. Playing football in Cerro de Pasco was a real challenge for physical endurance of athletes. Unfortunately, this team lost the professional category some years ago.

Another nice zone of Pasco is Pozuso a small town inhabited mainly by descendants of Austrian settlers. This peculiar town is a small part of Austria transplanted in the heart of Peru.

The region has also an important typical cuisine. It highlights the Pachamanca (meat and vegetables cooked over hot stones underground) and the dishes based in meats such as beef, lamb and pork.

The region is connected to Lima by road and by railway. There are also several roads that connect to Pasco with other neighboring regions such as Huanuco and Junin.