Pisco is one of the five provinces that compose the Peruvian region of Ica. Its capital is Pisco City a small town at the coast of the Pacific Ocean. The province is located in the northern central Ica to 231 Kilometers (143 miles) south of Lima.

The name Pisco comes from a native word that means bird; probably the ancient inhabitants of the region used this word to refer the drawing of a bird (one of the famous Nazca geoglyphs), which is near this zone.

The province is divided into 8 districts and its population is around 116 865 inhabitants. Because of the location of Pisco in middle of desert, its climate is very dry, with average temperatures that fluctuate between 15ºC (60ºF) and 25ºC (80ºF). Nevertheless, temperatures can reach 30ºC (86ºF) in summer and decrease until 10ºC (50ºF) in winter. 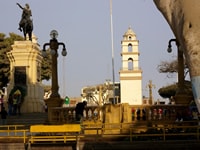 The Pisco province is famous for the drink of the same name. This alcoholic drink is the national drink of Perú and was invented in this Peruvian region; it is a delicious distilled liquor, which is derived from the grape.

The Pisco is prepared with several varieties of grapes such as “Quebranta”, “Mollar”, “Negra Corriente” (current black), “Italia”, “Moscatel”, etc. Each grape variety gives to the drink a special flavor. It is a great drink to take as aperitif; besides, the “Pisco Sour”, a cocktail, whose main ingredient is the Pisco, is one of the preferred drinks of the tourists that arrive to Peru.

The Pisco province has several tourist attractions, being the most important the “Paracas National Reserve”, a natural park, created to protect a great variety of native wildlife that includes a great number of fish, birds and mammals.

The Paracas reserve also includes the Ballestas Islands, a small archipelago inhabited mainly by an awesome number of sea lions and several archeological remains belonged to the pre-Inca Paracas Culture.

Some other landmarks of Pisco are: the Julio C. Tello Museum (which save a nice collection of pre-Inca items), the old “Tambo Colorado Citadel “ (an administrative center of the Inca period) and the “Candelabro” (candelabrum), an enigmatic figure drawn on a hillside in the Paracas Bay.

The main city of the province is Pisco City, which was founded in 1640 near an ancient native town of the same name. During the colonial period, this city prospered because of the vineyards that surround it.

The city has some ancient buildings such as the Baroque Church of “la Compañía de Jesus”, the Municipal Palace and the Mansion of José de San Martin (the liberator of Peru). Unfortunately in 2007, a great earthquake of 8.0-magnitude devastated the Ica and Huancavelica regions, destroying most ancient monuments of the city.

Pisco city is usually taken as base to visit the Paracas Reserve and the Ballestas Islands. It can reach Pisco by car, using the Pan-American Highway. Pisco city, the Capital of the province is around 2 hours from Lima by car. The nearest airport to Pisco is the airport of Ica, which receives local flights, mainly from Lima.

Pisco is a nice small town, which is ideal to take as base of a trip for the southern coast of Peru.