Puno is a small city located on the shores of the Lake Titicaca in the Collao Plateau. Puno is capital of the Peruvian region of the same name, which is at the southeastern of the country at the border with Bolivia. The city is at 3860 meters (12421 feet) above sea level and is the largest city of the Peruvian Altiplano.

Puno’s climate is quite dry and cold. There are rainfalls 4 months per year (amongst December and March).The main economic activities of the region are agriculture, livestock (mainly llamas and alpacas), tourism and trade with Bolivia. This last activity is very important to the region; since, Puno has been designated a Special Economic Zone, with several economic advantages like lower taxes. 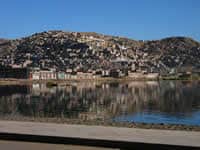 Puno is considered the folkloric capital of Peru, because of the great number of festivities and typical dances that take place every year in the region.

It highlights the feast of the “Virgen de la Candelaria” (Virgin of Candelaria). This feast lasts around one month (February) and it is characterized by a great Contest of Autochthonous Dances.

The Puno region was inhabited by several groups such as Aymaras, Collas, Zapanas, Lupacas and Kallahuayos. Around the XV century, this territory was conquered by the Incas.

Nevertheless, the current Puno city was founded in 1668 by the viceroy Pedro Antonio Fernandez de Castro as the capital of the San Juan Bautista de Puno province, however, the name of the city was changed to San Carlos de Puno in honor to the king Charles II of Spain. The city was an important point in the route between the silver mines of Potosi and the Peruvian coast.

During the colonial period many churches were constructed in Puno amongst them, the Cathedral of Puno, and the Church of San Pedro. These churches host still important collections of art including many paints of the prestigious Art School of Cusco, the most important school of art of America until the XIX century.

The Churches of the region are one of the greatest attractions of Puno. In addition to the Lake Titicaca, another important landmark of Puno are the Sillustani Burial Towers. These towers were created by the ancient inhabitants of the Altiplano to bury their leaders.

When Incas conquered the region, they continued the construction of these towers also known as Chullpas; but, Incas used their own architectonic style in the construction; therefore, the Sillustani Burial towers, are the finest cylindrical monuments of the ancient Peru. The artificial floating islands of the Uros in the Titicaca Lake are also an important tourist point of Puno.

Puno is a small city; but, it offers quite comfort. There are several nice hotels and good restaurants. It can reach Puno by car, traveling around 6 hours from Cusco or around 4 hours from La Paz (Bolivia).

Another option is take a ferry from Copacabana in Bolivia and cross the lake Titicaca to arrive to Puno. There is also a train service that connects Puno with Cusco y Arequipa, traveling by the Andean railway is an experience really unforgettable, because of the wonderful landscapes of the route.

There are also flights that arrive to the airport of Juliaca city, which is located to 40 minutes from Puno by car. Puno is a beautiful lake city in the heart of the Altiplano plateau.