San Martin is a beautiful region of Peru, located in the northern part of the country, in the upper part of the Peruvian Amazon rainforest. The capital of the region is the city of Moyobamba; nevertheless, the largest city of San martin is Tarapoto.

San Martin has borders with Loreto at north and east, Huánuco at south and La Libertad and Amazonas at west. The territory of this region is divided into 10 provinces and 4 morphological zones: the Andean Plateau, the zone of the wide valleys, the Cordillera Azul (Blue mountain range) and the zone of the low jungle. The climate in most part of the region is quite warm, humid and with frequent rainfalls. 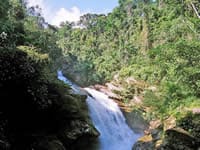 San Martin is crossed by several large rivers like the Huallaga River, which is one of the largest rivers of the country and one of the most important tributaries of the Amazon River hydrographical system.

This region has been inhabited since several centuries ago. The most famous civilization that ruled in this region before the Inca time was the Chachapoyas culture, which constructed several important monuments in the region like the famous Gran Pajaten, an amazing city located in the border between San Martin and La Libertad. In the XV century, the region was conquered by the Great Inca Empire that ruled in the region until the Spanish invasion.

In 1539 the Spaniard Alonso de Alvarado reached the banks of Mayo River near a region whose native name was Muyupampa and founded in this place the city of Moyobamba, which was the capital of the Amazonian region of Maynas during the colonial period.

On August 19, 1821, Moyobamba was one of the first Peruvian cities that declared its independencelso an excellent place to practice adventure sports, because of its beautiful rivers and mountains.

Currently, the main economic activity of the region is the agriculture. San Martin is considered by several specialists, as the future “Peru’s Granary”; since, this region has great possibilities to develop the cattle and the agriculture to great scale.

The capital of the San Martin region, the city of Moyobamba is a small nice city, which is known also as the City of Orchids, because of the great variety of these flowers that exist around the city. The outskirts of Moyobamba have many tourist attractions such as the Huacharos Cave, the hot springs of San Mateo, the Laguna Azul (Blue lake) or the Gera waterfall.

The other important city of the region is Tarapoto, whose population is around 108 042 inhabitants. The main activities in this city are tourism, commerce and agriculture. Around this city there are an impressive number of waterfalls; therefore Tarapoto is also called the Land of Waterfalls.

This city has one of the few airports of the zone, the “Guillermo del Castillo” Airport that operates flights from/to Lima and some other cities such as Iquitos and Pucallpa.

The best time to visit San Martin is on June 24, when all the Peruvian jungle celebrates the San Juan Holiday, a nice festivity with many shows and delicious food. It can reach San Martin by land using one of the three roads between Lima and the San Martin region, by air through the airport of Tarapoto and by river, sailing from Iquitos through the Huallaga River.

San Martin is one of most beautiful regions of the Peruvian Amazonian rainforest.