Tumbes is a Peruvian region located in the northern extreme of the country’s coast in the border with Ecuador. Its name derives from the word “Tumpis” , which refer to the native group that inhabited this region in the pre-Colombian time.

The region’s population is around 191 713 inhabitants and its capital is the city of Tumbes.

Tumbes is the smallest political region of Peru; its territory occupies an area of 4 045.86 square kilometers (1561.7 square miles). The main river of the region is the Tumbes River, which flows into the Pacific Ocean. 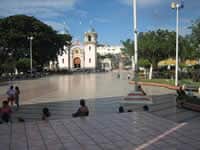 Most part of the region has a warm, sunny and humid tropical climate with an average temperature of 27ºC (81ºF); therefore, Tumbes is also known as the City of Eternal Summer.

However, temperature can reach until 40ºC(104ºF) in summer and decreases until 18ºC (64ºF) in winter. Usually there are not great rainfalls in the region, but, this situation change when occurs the “El Niño” phenomenon, which occurs approximately every 10 years, during this phenomenon, there are great rainfalls in the entire northern Peruvian coast, mainly in the summer between December and March.

The region has been populated since several centuries ago. The Tumpis were the most famous inhabitants of this zone until the XV century, when they were conquered by the Incas led by Tupac Inca Yupanqui the greatest conqueror of the Great Inca Empire.

Tumbes was the point where Spaniards started the invasion of Peru. During the colonial this region was abandoned and it was only a crossing point between Trujillo and Guayaquil. Tumbes gained importance only in the XX century after the war between Peru and Ecuador, and then the city became an important military location for the Peruvian army.

The capital and the largest city of the region is the city of Tumbes, whose population is around 111 000 inhabitants. The main activities of the city are the trade with Ecuador and the tourism, which is increasing thanks to the natural paradises that surround the city such as the Sanctuary of Mangroves, the national park Cerros de Amotape and the beautiful beaches of Punta Sal (considered the best beach of Peru) and Puerto Pizarro.

The city has an airport that receives local flights. Besides, it can reach Tumbes by car through the Pan-American Highway that connects to Tumbes with the rest of the Peruvian coast and the north of Ecuador.

The city has also a good hotel infrastructure, and nice restaurants that offer national and international dishes. The seafood is excellent in the region, mainly the “Cebiche” (fresh fish marinated in lime juice with garlic, toasted corn and another ingredients), which is one of the most representative and delicious dishes of Peru.

The best time to visit Tumbes is between September and March (spring and summer). Besides, during September it celebrates the Tumbes Tourist Week (September 21-27) that offers several cultural events and nice shows for the visitors.

Tumbes is a nice small city that offers many attractions for the lovers of the nature, the sun and the beautiful beaches.