Aurora are natural colored light displays in the sky which are usually observed in the polar zone at night. They occur in the ionosphere in this way some scientists call them “polar auroras”.

The effect is known as the aurora borealis in northern latitudes, “Aurora” is for Roman goddess of dawn and “boreas” is for Greek name for north wind. Also called the northern polar lights because it is only visible in the Northern sky from the Northern Hemisphere and it most often occurs from September to October and from March to April. The Cree call it the “Dance of the Spirits”.

In southern parts is called aurora australis or southern polar lights with similar properties, “australis” is the latin word for “of the south”.

Often it appears as a greenish glow or sometimes a faint red, as if the sum was rising from an unusual direction, generally it extends east-west direction. So it appears as curtains and some times they form “quiet arcs” and active aurora evolving and changing constantly. Each curtain consists of many parallel rays, each lined up with the local direction of the magnetic field lines such as the aurora is shaped by Earth’s magnetic field.

Benjamin Franklin brought the attention to the “mystery of Northern lights” and theorized the shifting lights to a concentration of electrical charges in the Polar Regions intensified by the snow and other moisture.

The collision of charged particles from Earth’s magnetosphere, electrons, protons and heavier particles with atoms and molecules of Earth’s upper atmosphere produce the Auroras. The particles have energies of 1 to 100 keV, which originate from the sun and arrive so near to the Earth with a relatively low energy of the solar wind.

Many factors influence in the color of the aurorae, most of them are green and red emission due to atomic oxygen, low level red and very high blue/violet aurorae are produced by molecular nitrogen and nitrogen ions. The ionic nitrogen produces light blue colors and the neutral nitrogen gives off the red and purple color with the rippled edges.

In addition the interacting of gases, different compounds of oxygen and nitrogen with the upper atmosphere will produce different colors, and the level of solar wind activity from the sun can also influence in the color of aurorae.

Aurora frequency of occurrence is common in the Poles in temperate latitudes, when a strong magnetic storm temporarily expands the aurora oval. The most common large magnetic storms are during the peak of the eleven year sunspot cycle or during the three years after that peak. Actually the geomagnetic storms that ignite aurorae occur during the months around the equinoxes and are tied to Earth’s seasons while polar activity is not.

On August 28, 1859 and September 2, 1859 as a result of the “great geomagnetic storm” are produced the auroras, the most spectacular ever witnessed throughout recent recorded history. Probably the aurora was produced by one of the most intense coronal mass ejections in history, very near to the maximum intensity of the sun.

Some telegraph lines seem to have been of the appropriate length and orientation which allowed a current to be induced in them and actually used for communication. The following conversation occurred between two operators around two hours using no battery power at all and working solely with the current induced by the aurora.

Worried by the destruction of this natural paradise, a group of summer’s residents, led by the president of Harvard's University, Carlos W. Eliot created a society in 1901 to protect the island of the uncontrolled development. 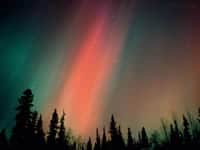 These theories are now obsolete, but some time ago has been proposed to explain the phenomenon.

Auroral electrons come from beams emitted by the sun, claimed by Kristian Birkeland around 1900; his experiments in a vacuum chamber with electron beams showed that such electrons would be guided towards the Polar Regions.

The aurora is the overflow of the radiation belt, “leaky bucket theory”. This was first disproved around 1962 by James Van Allen and co-workers.

The aurora is produced by solar wind particles guided by Earth’s field lines to the top of the atmosphere. Its true for the cusp aurora, but outside the cusp, the solar wind has no direct access.

Some of the best places to enjoy of this amazing natural wonder are:

But after seeing all these places on the Earth, we can consider that probably the best place where seeing an aurora boreal could be from the sky, flying near to Polar Circle. It will result an unusual and unforgettable view.