Located in the southwestern region of the United States as one of the Four Corners states with 626 km international border along to the states of Sonora and Baja California in Mexico, Arizona represents 306 000 km2 with approximately 15% of privately owned.

The Grand Canyon is one of the best attractions but in addition to it, many national forests, parks, monuments and Indian reservations are located here which represents the remaining area. Phoenix is it’s the capital and largest city. 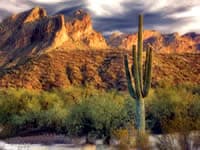 Arizona is characterized for the cactus in its well known desert landscape, its climate represent exceptionally hot summers from May to July and mild winters, due to its large area and variations in elevation.

The state contains mountains, plateaus, to the largest Ponderosa pine in the world and the Mongollon Rim, an escarpment cutting across the central section of the state and marks the southwestern edge of the Colorado Plateau, where the worst forest fire ever occurs in 2002. The region was shaped by prehistoric volcanism, followed by a cooling-off and related subsidence. But the entire region is slowly sinking.

In northern Arizona, the Grand Canyon is a colorful, steep-sided gorge, carved by the Colorado River. It contains one of the first national parks in the US, the Grand Canyon National Park. Also the Barringer Meteorit Crater, a gigantic hole in the middle of the high plains of the Colorado Plateau, to the west of Winslow. The crater is nearly a mile wide and 174 m of deep.

Probably the proper etymology of the name “Arizona” is for the Basque phrase aritz onak which means “good oaks”. It was initially applied to the silver mining camp and later to the entire territory. Other names had been considered for the territory such as “Gadsonia”, “Pimeria”, “Montezuma”, “Arizuma” and “Arizonia”, however when President Lincoln signed the final bill, it read “Arizona” and the name became permanent.

Marcos de Niza, a Spanish Franciscan friar, was the first European to explore Arizona in 1539. Around 1540, he searched one of the mythical Seven Cities of Gold, Cíbola (just a myth); however a year later another gold seeker, Francisco Vásquez de Coronado followed him. He met the original native inhabitants, probably the Sobaipuri.

Around 1690s the Society of Jesus Father Kino developed a chain of missions and taught the Indians Christianity in Pimeria Alta. In 1775, Spain founded fortified towns at Tucson. In 1821 Mexico achieved its independence from Spain, what is known as Alta California.

In 1848 after the Mexican War, most of the territory became part of the US and the southern portion of Arizona was added by the Gadsden Purchase in 1853. Arizona was the site of German and Italian POW camps during the World War II and Japanese US-resident internment camps, but they were abolished after war. Actually the Phoenix area is utilized as the Phoenix Zoo.

Arizona history is rich in legends of America’a Old West. The great Indian chiefs Geronimo and Cochise were here leading their people against the frontiersmen, The Tombstone, Ariz was the site of the West’s most famous shoot-out. Today Arizona has one of the largest US Indian populations; more than 14 tribes are represented on 20 reservations.

The most important industry is the manufacturing, principal products include electrical, communications and aeronautical items. The state produces over half of the country’s copper. Agriculture is also important to the state's economy. Top commodities are cattle and calves, dairy products, and cotton. In 1973 one of the world's most massive dams, the New Cornelia Tailings, was completed near Ajo.

Public bus transit systems served the Phoenix and Tucson metropolitan areas. The Valley Metro Rail is a light rail system which currently is being built and is projected to be operational by December 2008, when it is completed, it connect Central Phoenix with nearby cities of Mesa and Tempe.