Antelope Creek is located on Navajo Nation Land in the northern part of Arizona, just outside Glen Canyon National Recreation Area and close to AZ 98 a few miles east of town.

Antelope Canyon is a small but elegantly gorgeous geological formation. It is not a national or state park, and it is often ignored by many tourists who visit the area. It takes only an hour or two to see it all, but not for it, it is lost time.

Antelope Canyon is a popular location for photographers and sightseers, and a source of tourism business for the Navajo Nation. Antelope Canyon is the most visited slot canyon in the Southwest partly because it is easily accessible and by far the most publicized, and also it is extremely beautiful, with just the right combination of depth, width, length, rock color, and ambient light; many other slot canyons are deeper, narrower or longer, and some have rock that is even more colorful and sculptured, but there the conditions are ideal.

Upper Antelope Canyon called "Tse Bighanilini", or "the place where water runs through rocks", is the most frequently visited by tourists, due to two considerations. First, its entrance and entire length are at ground level, requiring no climbing.

Second, beams are much more common in Upper Antelope than in Lower Antelope. Beams occur most often in the summer months, as they require the sun to be high in the sky. Summer months provide two types of lighting. Light beams start to peek into the canyon March 15 and disappear October 7 each year. 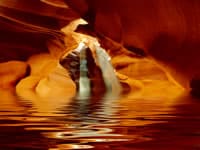 Lower Antelope Canyon called "Hasdeztwazi", or "spiral rock arches", is located a few kilometers away. Prior to the installation of metal stairways, visiting the Lower Antelope required climbing with ropes and ladders in certain areas.

Even following the installation of stairways, it is a more difficult hike than Upper Antelope, it is longer, narrower in spots, and even footing is not available in all areas. At the end, the climb out requires several long flights of stairs.

The views in Lower Antelope Canyon change constantly as the sun moves across the sky, filtering lights softly across the stone walls. These ever-moving sun angles bounce light back and forth across the narrow canyon's walls, creating a dazzling display of color, light, and shadow.

Antelope Canyon is open from April to October and is closed from November to March. But this part of the canyon is closed temporarily from July to August, for being a season of floods one of more dangerous station.

From May to July months (the summer solstice), that are closer, the sun shines more directly into the slot canyons. The colors are rich and deep in the morning and afternoon, and the famous light beams occur mid-day during the April to September.

This incredible canyon has been created over many thousands of years by the relentless forces of water and wind, slowly carving created intricate and extravagant shapes sculpting the sandstone into forms, textures, and shapes, which we observe today that words cannot fully describe. 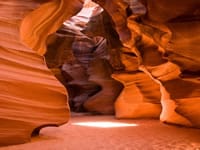 Over 190 million years took to form sand dune layers calcified into rock, the salmon color of the walls are composed of strata. Also it is possible to find walls of yellow, oranges, brown, and purple, color thanks to the Hematite and Goethite.

Very little rain fell at the site that day, but an earlier thunderstorm had dumped a large amount of water into the canyon basin, seven miles upstream. The only survivor of the flood was tour guide Francisco "Poncho" Quintana, who had prior swift-water training.

Today, ladder systems have been bolted in place, and deployable cargo nets are installed at the top of the canyon. Also in base station exists a radio from the National Weather Service, and an alarm before any contingency. Entry to Antelope Canyon is restricted only to guided tours led by authorized guides.

The mysterious and memorable beauty of Antelope Canyon also known as "Corkscrew Canyon", awaits the adventurous traveler who want to discover one of the most spectacular attractions of the Lake Powell area.