The State of Maine is situated in the extreme northeastern corner of the United States of America. It is bordered by the Atlantic Ocean to the southeast, New Hampshire to the southwest, the Canadian provinces of Quebec to the northwest, and New Brunswick to the northeast. Maine is the nation's most easterly state, the largest in New England, and 39th in size among the 50 states. 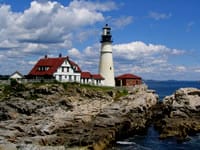 Much of Maine's geography was created by intense glacial activity at the end of the last ice age. Prominent glacial features include Some Sound and Bubble Rock.

Maine is known for its landscape, its rocky coastline, its low rolling mountains, and its deeply forested interior; as well as for its seafood cuisine, especially lobsters and clams. Maine also has the distinction of being the only state to border just one other state.

The coastline of Maine is shaped by numerous islands, which makes it one more of its tourist attractions. The largest is Mt. Desert Island; others include Deer Isle, Vinalhaven, and Au Haut Isle.

Maine is the most sparsely inhabited state east of the Mississippi River. It is called the Pine Tree State because 90% of its land is wooded. In the forested areas of the interior lies much uninhabited land, some of which does not have formal political organization into local units. 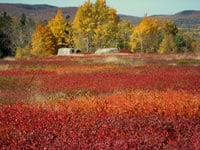 The state produces 25% of all blueberries in North America, making it the largest blueberry producer in the world. Aroostook County is known for its potato crops.

Commercial fishing, once a mainstay of the state's economy, maintains a presence, particularly bolstering and ground fishing. Western Maine aquifers and springs are a major source of bottled water.

Tourism and outdoor recreation play a major and gradually more important role in Maine's economy. Maine is one of the most popular tourist destination during the whole year, 59% of travelers arrive during the months of July, August, and September.

In the summer, the southern coast offers sandy beaches, icy surf, and several small harbors for sailing, and saltwater fishing. Northeastward, the scenery becomes more rugged and spectacular, sailing, and hiking are the primary activities. Maine has always attracted hunters, especially during the fall deer season.

There are 12 state parks and beaches. Baxter State Park, in central Maine, includes Mount Katahdino. Acadia National Park is a popular attraction, along with other wildlife areas, refuges, and forests.

The northern zone is both drier and cooler in all four seasons than either of the other zones, while the coastal zone is more moderate in temperature year round than the other two. Maine experiences humid summers, winters are cold and snowy throughout the state.

The annual mean temperature in the northern zone is about 5°C; in the southern interior zone, 7°C; and in the coastal zone, 8°C. Maine is generally secure from hurricanes and tropical storms. Maine has fewer days of thunderstorms than any other state east of the Rockies.