New York City officially The City of New York the so called Big Apple is the largest city in the United States, with its metropolitan area ranking among the largest urban areas in the world. It is located in the Northeastern United States, approximately halfway between Washington, D.C. and Boston.

The city is probably the world's most important financial center, communications, fashion, and one of the most important cultural centers of the Western world. The United Nations headquarters is in New York City, giving some credence to the city's self-designation as "Capital of the World". 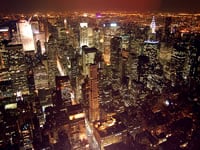 Also is a global hub of international business and commerce and is one of three "command centers" for the world economy (along with London and Tokyo).

Other important sectors include medical research and technology, non profit institutions, and universities. Manufacturing accounts for a large but declining share of employment. Garments, chemicals, metal products, processed foods, and furniture are some of the principal products.

The food processing industry is the most stable major manufacturing sector in the city. Food making is a $5 billion industry that employs more than 19,000 residents, many of them immigrants who speak little English. Chocolate is New York City's leading specialty food export, with over $235 million worth of exports each year.

The city is also important in the American film industry. Today, New York City is the second largest center for the film industry in the United States. Also is a global center for the television, advertising, music, newspaper and book publishing industries and is also the largest media market in North America (followed by Los Angeles, Chicago, and Toronto).

New York City is exceptionally diverse. Throughout its history the city has been a major point of entry for immigrants. The five largest ethnic groups as of the 2005 census estimates are: Puerto Ricans, Italians, West Indians, Dominicans and Chinese. The Puerto Rican population of New York City is the largest outside of Puerto Rico. Italians immigrated to the city in large numbers in the early twentieth century.

Tourism is important to New York City, with about 40 million foreign and American tourists visiting each year. It has a variety of attractions for all ages with the most diverse selection of entertainment, museums and restaurants. New York City the so called Big Apple, America’s largest city and home of the Statue of Liberty National Monument reigns as capital of the world, an economic powerhouse

The Statue of Liberty, Ellis Island, and Trinity Church are only a few major historic attractions and landmarks this Mega City has to offer. It is a major tourist attraction and one of the most recognizable icons of the United States. Approximately 35 Million tourists from all over the world visit the city each year.

Other major destinations include the Empire State Building, Ellis Island, Broadway theatre productions, museums such as the Metropolitan Museum of Art, and other tourist attractions including Central Park, Washington Square Park, Rockefeller Center, Times Square, the Bronx Zoo, New York Botanical Garden, luxury shopping along Fifth and Madison Avenues, and events such as the Halloween Parade in Greenwich Village, the Tribeca Film Festival, and free performances in Central Park at Summerstage.

The government of New York is more centralized than that of most other U.S. cities. In New York City, the central government is responsible for public education, correctional institutions, libraries, public safety, recreational facilities, sanitation, water supply and welfare services. The city is also a leader in the construction of energy efficient green office buildings, including the Hearst Tower among others.

New York City is supplied with drinking water by the protected Catskill Mountains watershed. As a result of the watershed's integrity and undisturbed natural water filtration process, it is one of only four major cities in the United States with drinking water pure enough not to require purification by water treatment plants.

The climate of New York City is humid subtropical. Summers are typically hot and humid with average high temperatures of 29°C and lows of 21°C. Temperatures of 32°C or higher occur on average 18 - 25 days each summer.

Winters are cold but the city's coastal position keeps temperatures slightly milder than inland regions, with high temperatures of slightly above freezing and lows of just below freezing. Spring and autumn can range from cool to hot, although they are usually pleasantly mild with low humidity. New York City enjoys on average 234 sunny days every year.

The annual precipitation, which is fairly distributed throughout the year, is around 1,180 mm. The average winter snowfall is around 25 inches (63.5 cm), but this often varies considerably from year to year. Thunderstorms, sometimes severe, are common during the summer months.