The Building Materials on the exterior is Indiana limestone and granite, trimmed with aluminium and chrome nickel steel from the 6th floor to the top, the interior the lobby was made by Ceiling high marble, imported from France, Italy, Belgium and Germany. The facade is composed of more than 200,000 cubic feet of Indiana limestone and granite, and utilizes several setbacks to offset the optical distortion.

It has height 448 meters to top of antenna, 391 meters to 102nd floor observatory, 320 meters to 86th floor observatory. And cover an area of 83,860 square feet. The top of the Empire State Building is lit up at night in different colours to celebrate various holidays.

The Empire State Building Observatory on the 86th and 102nd floors provides incredible views of Manhattan. It's one of the most popular tourist destinations in New York City on a clear day you can see up to 80 miles in any direction.

The observatory is open daily from 9:30am to midnight. All visitors must enter through the Fifth Avenue entrance and security is strict so expect a wait. You'll want to bring some quarters for the coin operated telephoto viewers on the observation deck.

The construction began on March 17, 1930, built in the midst of the Depression, it was, and still remains a testament to American fortitude and ingenuity, the building was the center of a competition between Walter Chrysler (Chrysler Corp.) and John Jakob Raskob (creator of General Motors) to see who could build the tallest building.

Designed by architectural practice Shreve, Lamb and Harmon Associates, construction of the building superstructure began on the site of the old Waldorf-Astoria Hotel on 17 March, 1930; although excavation for the foundations had commenced on 22 January, 1930. One of the enduring achievements of the Empire State Building was the speed of its construction. 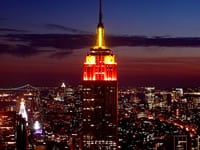 By October 3, 1930, there were 88 floors finished and only 14 to go. These top floors took the form of a distinctive tower of glass, steel, and aluminium. The tower is about 200 ft. high and topped with a dome.

Construction of the building requiring 7 million man hours, 60,000 tons of steel and 10 million bricks proceeded at a record pace even though the stock market crash of 1928 happened just a few weeks after the massive project was begun. It was built in just 18 months and was one of the first to employ the then new fast track construction technique.

In 1985 a 22 story television antenna was attached to the top of the building and serves a lightning rod protecting surrounding buildings. The rod absorbs around 100 lightning strikes each year.

For 40 years after it was constructed, it held the record for being the largest skyscraper in the world. The building has starred in over 90 movies, and it remains one of New York City's most popular tourist attractions.

Although the Empire State Building is no longer the world's tallest building, it is still visited by millions of tourists each year and has been featured in over 90 famous movies like King Kong or Sleepless in Seattle.

It was official opening in May 1, 1931, by President Herbert Hoover, who pressed a button in Washington, D.C. to turn on the building's lights.

The Empire State Building is a legend. An international icon, it has been visited by more than 117 million people, who come to marvel at the 80 mile view into New Jersey, Pennsylvania, Connecticut and Massachusetts.