The Golden Gate Bridge had the longest suspension bridge span in the world (4,200 foot) when it was completed in 1937 and has become an internationally recognized symbol of San Francisco and California.

Despite its red appearance, the colour of the bridge is officially an orange vermilion called international orange. The colour was selected by consulting architect Irving Morrow because it blends well with the natural surroundings yet enhances the bridge's visibility in fog.

The towers that support the Golden Gate Bridge's suspension cables are smaller at the top than at the base, emphasizing the tower height of 500 feet above the roadway Coit Tower is another San Francisco landmark with an Art Deco design.

Linking San Francisco with Marin County the Golden Gate Bridge is a 1.7 mile-long suspension bridge that can be crossed by car, on bicycles or on foot. On an average day 118,000 vehicles cross the bridge. The bridge has six total lanes of vehicle traffic, and walkways on both sides of the bridge.

The speed limit on the Golden Gate Bridge was reduced from 55 mph (89 km/h) to 45 mph (72 km/h) on 1 October 1983. The eastern walkway is for pedestrians and bicycles during the weekdays and during daylight hours only, and the western walkway is open to bicyclists on weekday afternoons, weekends, and holidays.

It united three Boroughs of New York: Manhattan, the Bronx, and Queens. It remains the largest vertical-lift bridge in the world. It joins three giant bridges into one and consists of 13,500 feet of elevated viaduct and fourteen miles of roadway, all travelling over Randall's and Ward's Islands.

Since its completion, the span length has been surpassed by eight other bridges. It still has the second longest suspension bridge main span in the United States, after the Verrazano Narrows Bridge in New York City.

The idea to cross the Golden Gate strait was originated as early as 1872 by a railroad magnate. Not until 1916 was a serious attempt made to make the crossing. Bridge designer Joseph Strauss felt he could cross the Gate with a huge suspension bridge and do it for under $30 million dollars.

In 1921, Strauss finalized a plan and set out to convince San Francisco citizens and leaders that it could, and should, be done. In 1919 the visionary engineer, Joseph B. Strauss, came to San Francisco to inspect the bridge site. He was convinced he could build a bridge spanning the Golden Gate.

In November 1930, a major hurdle was overcome; six Northern California counties, including Marin and San Francisco, voted in favour of a $35 million bond measure to finance the construction of the bridge.

To celebrate this important victory, every store in Marin County closed at 3 p.m. on November 12, so that the entire community could attend a football game in San Rafael and watch an air circus. The evening culminated with a parade, illuminated floats & fireworks. 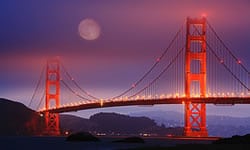 Golden Gate Bridge construction commenced on January 5, 1933 and lasted four and a half years. The resulting structure, renowned for the simplicity and elegance of its design, has become emblematic of the San Francisco Bay Area and has achieved fame worldwide.

On May 27, 1937, the bridge opened to pedestrians with much fanfare. Enthusiastic crowds picnicked on the middle of bridge and there was a great procession at mid-day with 20,000 marchers and floats representing every county in the bridge district.

The GGB opened to vehicular traffic on May 28, 1937 at twelve o'clock noon, ahead of schedule and under budget, when President Franklin D. Roosevelt pressed a telegraph key in the White House announcing the event The Marin Headlands side of San Francisco's GGB is a great place to take pictures such as this July 4th fireworks photo and watch freighters and sailboats cruise under the bridge.

The bridge required so much concrete that cement factories throughout the Eastern United States that closed as a result of the Great Depression were re-opened just to make the concrete for the bridge. To make the wood for the forms that held the concrete, whole forests were cut down in Oregon.

5,000 men at a time worked directly on the bridge. These men were only the ones actually put the bridge together; tens of thousands more worked to prepare the materials that made up the bridge. Completing the bridge took 31 million work-hours, in 134 cities, across 20 states. In the middle of the Depression this project was so huge that it alone buoyed the economy of the whole country.

The year 2007 marks the 70th birthday of possibly the most beautiful, and certainly the most photographed, bridge in the world. San Francisco's Golden Gate Bridge, named for the strait leading from the Pacific Ocean to the San Francisco Bay, spans tidal currents, ocean waves, and battering winds to connect The City by the Bay with the Redwood Empire to the north.

Millions of visitors come to the bridge each year. The speed limit of the bridge is now only 45 miles per hour and traffic fines have been doubled for the bridge. A $3 fee is collected for southbound traffic and tourists who want to ride their bikes across the bridge can take advantage of the 10-foot wide sidewalks.