The State of Wyoming is a sparsely populated state in the western region of the United States. Wyoming is bordered on the north by Montana, on the east by South Dakota and Nebraska, on the south by Colorado, on the southwest by Utah, and on the west by Idaho.

Most of the state is dominated by the Rocky Mountain West, while the eastern section of the state is a large meadow; this region is known as the High Plains. The capital and largest city of Wyoming is Cheyenne. 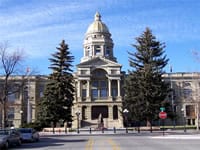 Wyoming is only one of the three states, along with Colorado and Utah only to the lines of latitude and longitude of the borders and has no natural boundaries. The border of Wyoming deviates from the latitude and longitude lines of up to 8 km in some places. It is the tenth largest state in the United States, covers 253,348 square kilometers and consists of 23 counties.

The Teton Range in the northwest extends for 80 km and represents the most impressive section of mountains in the state. It is home to Grand Teton, the second highest peak in Wyoming, and to Grand Teton National Park, which preserves the most scenic section of the Teton Range. Several rivers will begin to flow through the state, including the Yellowstone River, Powder River, Green River, and the Snake River.

Components of Wyoming's economy differ significantly from those of other states. The mineral extraction industry and the travel and tourism sector are the main drivers behind Wyoming’s economy.

Historically, agriculture has been an important component of Wyoming’s economic identity. Its overall importance to the performance of Wyoming’s economy has waned. The main agricultural commodities produced in Wyoming include livestock, hay, sugar beets, grain and wool.

Wyoming's mineral commodities include coal, natural gas, methane gas from coal, crude oil, uranium and trona, Wyoming collected more than $ 48 million in sales taxes from the mining industry. The state is the number one producer of coal in the U.S., fifth in the nation for the production of natural gas and seventh among oil producers. 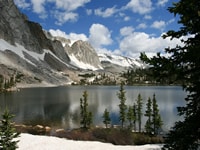 The climate in Wyoming is generally a semi-arid continental climate which is drier and windier in contrast to most of the United States with temperature extremes. Summers are warm with July high temperatures averaging between 29-35 °C in most of the state.

Summer nights throughout the state are characterized by a rapid cool down. Winters are cold, but are variable with periods of sometimes severe cold interspersed between generally mild periods, with Chinook winds providing unusually warm temperatures in some locations.

Wyoming is an arid state. The lower areas in the North and on the eastern plains typically average around 250-300 mm. Thunderstorm activity in the state is highest during the late spring and early summer. The southeastern corner is the most vulnerable part of the state to tornado activity.