The temples of Bagan or Pagan (as anciently was known this place) are an extraordinary set of ancient Buddhist sanctuaries, which were built mainly between X century and XII century in the actual territory of Myanmar (Burma) on the eastern bank of the Ayerwady River to 145 Kilometers (90 miles) of Mandalay city.

The impressive religious complex of Bagan is composed by around 2200 temples and pagodas and covered an area of almost 26 square miles.

These temples are a compendium of the architectural styles developed in the region during the historical period, they were constructed such as “Stupa with a relic-shaped dome”, “Stupa with tomb-shaped dome”, “Sinhalese-styled stupa”, “North Indian model”, “Central Indian Model”, “South Indian model”, “Mon model”. Nevertheless, most structures were built using two kinds of buildings: the pagoda and the temple.

Both types of structures have their own goals. The pagoda was a symbol of adoration, whereas the temple served for worship and meditation. To build the structures the constructors used mainly bricks, sandstone and large-sized timber.

Some metals like iron and bronze also were used but not extensively. The pagodas were constructed using a structural framing system, which consists of a systematically framed outer wall brick, strengthened with sandstone at intervals and a central hard core consolidated with brickbats and earth.

Some of the most important and beautiful temples that remain standing in Bagan are:

The archeological and religious Bagan complex covers about 16 square miles. Most structures in this complex were constructed from the 1000 to 1200 AD. During this time Bagan was the capital of the Burmese Empire for second time.

The golden age of Bagan began in 1057 AD when the King Anawrahta conquest Thaton. Anawrahta was Buddhist; therefore he brought back to Bagan the scriptures of Theravada Buddhism and with the help of a monk from Lower Burma, he converted the people of the country to the Buddhism.

Anawrata initiated the massive construction of temples and other religious buildings in Bagan which we can see still. But his successors were who continued the tradition started by Anawrata by 290 years, since they constructed over 10000 temples and pagodas in Bagan. 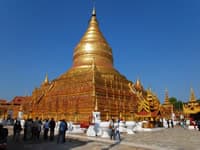 During its apogee Bagan was one of the most important religious and cultural centers of Asia, it reached a population 300 000 people and around 10 00 temples and pagodas existed in Bagan.

Unfortunately the attacks of enemies and several earthquakes destroyed most buildings of the ancient capital of Burma.

The golden age of Bagan finished in 1287 when the region was invaded by Mongols, who sacked the city and the temples. Nevertheless, the city was still an important Buddhist center, but its political importance was lost forever. Little by little the city was abandoned and nowadays only the temples and some archeological remains survive of which was one of the most important capitals of Asia.

The Burmese government has tried to restore the temples of Bagan. Unfortunately, these restorations have been made without respect for the original materials and architectural styles of the building. Therefore UNESCO never declared Bagan as World Heritage. But, Bagan is definitely one of the sites of the planet that worth visiting before die.