Fatehpur Sikri, “the City of Victory”, is a city and a municipal board in Agra district in the state of Uttar Pradesh, India.

Built during the second half of the 16th century by the Emperor Akbar, the complex of monuments and temples, all with the same architectural style includes the Jama Masjid, one of the largest mosques in India.

The majestic marble and red stone structures of the city still narrate the formidable past of this ancient city. Non doubt the exquisite architectural splendour of Fatehpur Sikri has left a permanent impression in the legacy of Indian architecture.

The name, Fateh means victory in Urdu and Persian with an Arabic origin. The Mughal Emperor Akbar wanted to make Fatehpur Sikri his headquarters, so he built this majestic fort, but due to the lack of water, he must to move to Agra Fort, which was a great asset militarily as well as it served as the Royal residence.

Once a small village, Fatehpur Sikri holds a fascinating tale about the capital of Mughal Emperor Akbar. The legend goes; Akbar decided to seek the blessing of Shaikh Salim Christi who used to live in the village, Sikri.

The saint prophesied that Akbar would have three sons and soon it came be true and born his first son Salim. Akbar was so glad that he decided to build his new capital near Sikri and named as Fatehabad, later it became Fatehpur.

Akbar ascended to the throne in 1556 at 14 years, apparently due to the sudden demise of his father Humayun. As soon as he consolidated his power, Akbar turned his attention in built a magnificent Imperial capital at Agra. He built the new city according to the instructions of Salim Chisti whose mausoleum is a part of Fatehpur Sikri.

Another set of historians say that he built the new city at Fatehpur Sikri as it was falling on the highway towards South India from North India. From this place he was able to control all parts of the country and move in any direction without much trouble. 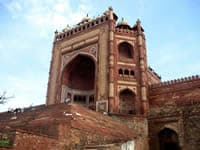 It was the capital of the Mughal Empire from 1571 until 1585 until it was abandoned due to lack of water.

The abandoned city then slowly started to see the signs of negligence and never regained its lost glory again. The tomb "Salim Chisti Ka Mazar" was built in honour of Sufi saint Salim Chishti in 1571 by Akbar. But history never forgot the city and now it is one of the most visited tourist destination and one’s of the World Heritage Site in India.

The finest treasures of the Mughal artistry and royalty are the number of architectural treasures that ornate the city with the colours of red and pink. The great majesty of the Mughals slowly unfolds in front of you whether you take a walk inside barren palaces and halls.

Many royal palaces have been built in Gujarati and Rajasthani architectural styles, using ornate columns, sumptuous carving and surface ornamentation.

Most of buildings located inside Fatehpur Sikri are unique blend of architectural traditions; the small palaces are largely a sequence of connected rectangular courtyards aligned with the polar axes and grouped in a staggered formation across.

Some of the important buildings in this city are: