The magnificent Sun Temple at Konark is located in Puri district, state of Orissa, India. Considered the culmination of Orissan Temple architecture and one of the most stunning monuments of religious architecture in the world, the Sun temple was built in black granite by King Narasimhadeva in the 13th century.

Originally the Sun Temple was located nearer to the coast and was used as a navigational point by sailors, who refered to it as the 'Black Pagoda'. The name is derived from Kona – corner and Arka – sun. Konark is known as Konaditya and Arkakshetra. The temple dedicated to Sun God was build as a chariot to him with wheels on all sides of the temple. It is one of the earlie places where Sun God was worshiped.

Built by the Ganga King Narasimha Deva in thirteenth century, the ruins of this temple were excavated in late 19th century. The tower over the Garbagriha is missing, however the Jagmohana is intact.

The roof of the Jagmohana is made of horizontal tiers grouped in three stages with life-size female sculptures of matchless charm and delicacy adorning each stage, the whole surmounted by two stupendous crowning members, produces a picturesque contrast of light and shade and is unparalleled for its grandeur and structural propriety. Majestic in conception, this temple is indeed one of the sublimest monuments of India, notable by the harmonious integration of architectural grandeur with plastic elegance.

Mayadevi Temple is situated to the west of the main temple and is consider the rest of temple no.2, believed to have been one of the wives of Lord Surya. The temple facing east, consists of a sanctum (deul) and a porch (Jagamohana) standing over a raised platform. The superstructures of the sanctum and porch are missing. The interior of the porch is notable for their sculptural treatment while the sanctum is devoid of any deity. 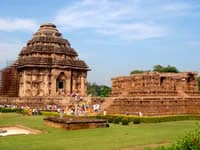 Vaishnava Temple is a small brick temple, discovered in 1956 during the sand clearance. Also called temple no.3 is pancharatha on plan. It consists of a deul and a Jagamohana but with the superstructure is missing and devoid of any exterior decoration. Images of Balarama and two parsvadevatas of Varaha and Trivikrama were unearthed and now displayed in Archaeological Museum, Konark.

The Konark temple is widely known not only for its architectural grandeur but also for the intricacy and profusion of sculptural work. The entire complex was designed in the shape of a colossal chariot drawn by seven horses on 24 wheels organized in pairs, carrying the sun god, Surya, who has been a popular deity in India since the Vedic period. Each wheel has around 10 feet in diameter, with a set of spokes and elaborate carvings. The seven horses drag the temple. Two lions guard the entrance showning a war elephant. Each elephant in turn lies on top of a human body and stairs lead into a dance hall. The base and walls of the Sun Temple features a sequence of carvings that represent religious, military, social, and domestic aspects of this period. Many of these are erotic in nature, a style of which Konark is famous.

The temple symbolises the majestic stride of the Sun God. At the entrance of the temple is a Nata Mandir, in front of the Jagamohana is also intricately carved. There are various floral and geometric patterns around the temple, as well as human, divine and semi-divine figures in sensuous poses derived from the Kama Sutra. There are images of animals, foliage, men, warriors on horses and other interesting patterns. There are three images of the Sun God, positioned to catch the rays of the sun at dawn, noon and sunset.

Now the temple is partialy in ruins, and a collection of its sculptures is housed in the Sun Temple Museum, run by the Archaeological Survey of India. The poet Rabindranath Tagore wrote of Konark: "here the language of stone surpasses the language of man." Although the Konark Sun Temple has lost many of its original structures, still remains some of which confirm the infinitive imaginative power of its artists of the time and their inspiring contribution to Vaisnav Culture.