It is a Turkish port at the Aegean Sea in the southwestern region of Turkey, which was called anciently Halicarnassus of Caria and was the town where the Mausoleum of Mausollos, one of the Seven Wonders of the Ancient World was. This port is currently one of the most important centers of tourism and yachting of Turkey.

It is located in the beautiful peninsula of Bodrum (in the Mugla province) that was home of the famous historian Herodotus one of the authors of the list of the seven wonders. 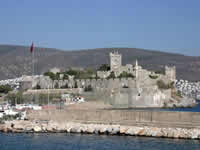 The first human settlements of Bodrum belonged to the Carians and the Dorian Greeks who occupied the zone around 700 BC.

Later the city was part of the Persian Empire. One of the satrapy (Persian governor) was the king Mausollos, (ruled 377 – 353), whose tomb “The Mausoleum” was one of the Seven Wonders of the Ancient World. Today there are only some remains of the fabulous tomb, which are one of the tourist attractions of the city.

According to the history, after Mausollo’s death, Ada of Caria took the power in Halicarnassus (the ancient name of Bodrum) and became the Persian satrapy.

This woman surrendered when Alexander the Great arrived to Caria, then Alexander entrusted the government of Caria to her; therefore, she adopted Alexander as her son to ensure that the crown of Caria passed unconditionally to him after the Ada’s death. The archeologists have found the tomb of Ada and her remains are currently in the archeological museum of Bodrum.

The entrance to the port of the city is guarded by an impressive medieval castle (Castle of Saint Peter), which was constructed by the Crusaders Knights of Rhodes in the XV century.

This castle was built thanks to a permission gave by the Ottoman Sultan Mehmed; the castle and its town were called Petronium whence the modern name of the city (Bodrum) derives. In the XVI century the city was conquered by Suleyman the Magnificent and became part of the Ottoman Empire.

At the beginning of the XX century Bodrum was a small fishing town until the writer Cevat Sakir Kabaagaccli who was exile under fortress arrest in the Bodrum Castle wrote the book “The Fisherman of Halicarnassus”, which attracted first many intellectuals and tourists later.

The region of Bodrum is famous by its clear, tide less, warm seas, where it can find caves, rock formations and many reefs. Bodrum is also the cradle of the underwater archeology, which was conceived in 1959 by the journalist and diver Peter Throckmorton, who dove in several shipwrecks guided by the Turkish sponge fisherman Kemal Aras. Therefore, Bodrum has an important underwater archeology museum which displays a great variety of objects recovered from the Sea.

Today Bodrum is known as a popular holiday resort. It is one of the most famous tourist destinations of Turkey. During summer the population of the city grows from 50 000 people to around one million. There are many yachts and gullets (a two-masted wooden sailing vessel) in the zone, therefore the “Blue Cruise” a famous Turkish Mediterranean classic for yachts in the Aegean and Mediterranean Sea starts in Bodrum

As any tourist city, Bodrum is full of resorts, guest houses, hotels, shops, restaurants, shops and bars. The city has also an International airport, which has connections with the main cities of Europe. Besides, there are ferries from Bodrum to the main Greek islands, such as Rhodes or Kos. Bodrum is a nice city full of wonders.