The famous tomb of the king Maussollos of Halicarnassus known as the Mausoleum of Maussollo , which served as tomb for the satrap (a local governor) of the Persian empire and his wife (who was also his sister) was considered by the ancient Greeks one of the Seven Wonders of the World.

The tomb was a rectangular building of around 120 feet (40 m) for 100 feet (30 m). The tomb was erected on a hill overlooking the city. The building was in an enclosed patio in whose center was a stone platform on which the Mausoleum sat.

There, it had a beautiful staircase flanked by stone lions which led to the top of the platform. Many statues of gods and goddess ornamented the outer walls. Each corner of the tomb was guarded by statues of warriors mounted on horseback.

At the center of the platform was the tomb itself, which was made of marble. The Mausoleum was around 140 feet height. The tomb was covered by sculptures in reliefs that showed scenes of the Greek history and mythology, such as the battle of the Centaurs with the Lapiths or scenes of battles of the mythical Amazons.

Thirty-six slim columns (9 for side) adorned the four sides of the tomb, between each 2 columns, there had a statue; behind columns was a solid block which supported the weight of the great roof. The roof was the shape of a staggered pyramid. Perched at top of the tomb four horses pulling a chariot in which images of Mausolus and his queen rode.

The famous tomb of the governor of Halicarnassus was finished around 350 BC. Mausollos of Caria was the governor of the region of Caria from 377 to 353 BC and he moved the capital of the kingdom of Caria to Halicarnassus. Really, the construction of the tomb of the ancient king was not idea of him. The great project was created and ordered by the wife and sister of Mausollos, Artemisia.

The construction of the tomb began when Mausollos was still alive. Artemisia sent messengers to Greece to find the most talented artists of the time amongst them Scopas (who had supervised the reconstruction of the Temple of Artemis in Ephesus), Bryaxis, Timotheus and Leochardes. Each one was responsible for one side of the tomb. 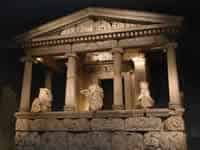 After Mausollos’s death, Rhodes an island which was conquered by Mausollos rebelled against Haicarnassus. But Artemisia defeated to the Rhodians. The queen lived some years more after death of his husband.

But when she died his body was buried together Mausollos in the tomb that she ordered to build, despite the splendid tomb was not yet finished. According to the Greek historian Pliny, after Artemisia’s death, the craftsmen decided to stay and conclude the tomb because they considered that it was at once a memorial of his own fame and of the sculptor's art.

The mausoleum was untouched by many years. It survived the invasion of Alexander the Great in 334 BC and pirate’s attacks in 62 BC. For 16 centuries the tomb remained in good condition. But an earthquake damaged the roof and several columns.

At the beginning of the XV century during crusades the Knights of St. John from Malta invaded the region and they used the stones of the Mausoleum to build the great castle of Bodrum where many of the statues that ornamented the tomb were carried.

In 1522 almost all blocks of the ancient wonder had been disassembled and used to construct other buildings. Today some sections of polished marble from the Mausoleum can still be seen in the Bodrum castle.

In the XIX century many statues were carried from the castle to the British Museum. In 1852 Charles Thomas Newton a British archeologist searched the location of the mausoleum. He found a staircase and three corners of the foundation as well as sections of the reliefs and the roof. Finally he found the statues of Mausolus and Artemisia. Today most works of art found in these excavations can be seen in the Mausoleum Room in the British Museum.

Some modern buildings were inspired by the Mausoleum like the Grant´s Tomb in New York, Los Angeles City Hall, the Shrine of Remembrance in Melbourne, the House of the Temple in Washington DC, the Indiana War Memorial or the St. George’s Church Bloombury in London.