Aya Sofya in Istanbul is a most beautiful building that seen many hazards through the ages. It has survived fire, earthquake and the vandalism of rioters, but each time it literally rose from its ashes and is now considered one of the most majestic human constructions ever seen.

The church of Holy wisdom was constructed in 360 AD by the Constantine’s son. It remained until 404 AD as the “Great Church” when the fury of the mob did not let trace of the original structure. Rebuilt in larger dimensions by Thodosius II in 405 AD during the Nika revolt it was burnt down along with half of the city in 532 AD.

The next reconstruction was made by Justinian who brought eight Corinthian columns from Baalbek to Constantinople. Time back it was the largest cathedral in the world but in 989 during the devastated earthquake its beautiful dome crumbled down along with many other parts. So “Trdat” the famous architect, was invited for the reconstruction by the Byzantine government.

For years Hagia Sophia experimented diverse changes, it was converted in a mosque; Mehmud I established a “Kulliye” in the complex, which was a Koranic school, social kitchen and a library; Sultan Abdulla did extensive modification works; the father of Turkey, Mustaffa Kemal Pasha converted the monument in a museum so all are prominent names associated with its history “temple church mosque museum”.

Sinan a Turkish architect was engaged for the restoration and strengthening of the structure. He completed the work with two minarets by the sides of the main structure which dampened the seismic energy of the earthquakes.

Thereby this theory has been approved by the modern seismologist and Sinan is considered as the first engineer in the world who built building that can combat a quake with architectural changes.

The basilica represent a major revolution in church construction, it featured a huge dome which needed of new ideas in order to support its weight, a feat which had not been attempted before. In the days when there was no steel used in construction, large roofs and domes had to be supported by massive pillars and walls.

The dome was supported by four piers each measuring about 118 square yards at the base. The church itself measures 260 x 270 feet; the dome rises 210 feet above the floor and it has a diameter of 110 feet. The nave is 135 feet wide, more than twice the width of the aisles which measure 62 feet. 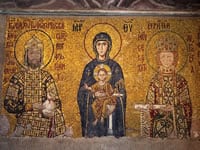 The Deesis mosaic was a later addition of the 12-13th centuries to the upper South Gallery of the Church.

During Byzantine times this area of the church was reserved for members of the Imperial family and the court who viewed the liturgy from this easternmost bay of the church.

Originally the vaults of the gallery were covered with mosaics of Pentecost and Seraphim, but this all came down in an earthquake in 1894.

Many consider this mosaic among the greatest treasures of world art and culture. Among Christians it is often called the finest representation of Christ. It is a great tragedy that most of the mosaic has been lost but the survival of the beautiful faces of Christ, His Mother and St. John the Baptist is nothing short of miraculous.

The amazing survival of Hagia Sophia is due to the love and care of centuries of believers who have made it a home of prayer, history and art.